Theobroma Cocoa, The Food of the Gods 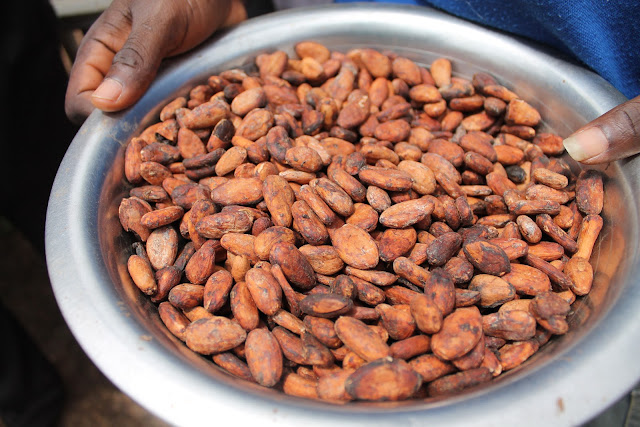 Cocoa has been cultivated for well over 3,000 years and remains one of the greatest discoveries of all time. The Aztecs valued chocolate so much they used the beans as a means of currency and also made xocolatl, a cocoa beverage which was drunk in court and during religious ceremonies. The process for cultivating, harvesting and processing cocoa beans has changed very little over the years:

“The beans would have first been collected, left to ferment naturally, sun dried, roasted in earthen pots, and de-shelled by hand. The kernels were then ground on a slightly concave stone called a metate using a cylindrical grinder. At this point, spices and herbs of various kinds, including vanilla, might have been added to improve the taste. The resulting paste was then formed into cakes to cool and harden. For consumption, the cakes would be broken up, dissolved in water, and beaten to a foamy consistency.” – Cocoa and Chocolate Manual, deZaan

The Spanish were the first to discover the possibilities of chocolate. They kept it a secret and conducted chocolate experiments for well over 140 years before the secrets of the cocoa bean leaked out to other European countries. Drinking chocolate became popular in Western Europe during the 17th Century and was serving as a source of tax revenue for governments. As the value of cocoa began to rise, attempts to cultivate varieties of Theobroma Cacoa followed. However, because of it’s specific cultivation requirements, initial efforts were met with disease and pests. Successful attempts were close to the tree’s origin of Mexico, places such as Brazil and the Caribbean Islands. By the late 17th century the Spanish had introduced cocoa to Asia, setting up the first cocoa plantation in Indonesia. Soon after, the seeds were taken over to West Africa where the Theobroma Cacoa has thrived ever since.

Ghana is the second biggest exporter of cocoa, and produces the highest quality cocoa in the world. Unlike it’s neighbour Ivory Coast who is the biggest exporter of cocoa, Ghana maintains high standards due to the country’s cocoa standards agency, COCOBOD. For Ghana, cocoa is a major export, and a vast amount of money goes into maintaining and regulating this. Cocoa is a cash crop, and for that reason most farmers will grow vegetables and fruit alongside the trees. This encourages bio-diversity that enhances environmental factors. This is only possible because the Ghanaian government does not allow the ownership of cocoa plantations by foreigners. Ghana was also the first cocoa producing country to start a farmer’s co-op, Kuapa Kokoo, who set an example as Fair Trade cocoa producers for the rest of the world. This small scale, regulated system of cocoa farming is unique and is why Ghana continues to export premium cocoa beans.

Most modern cocoa trees in Ghana are hybrids as they require specific environmental conditions and year round tending to maximise yields. These hybrids are much shorter (3 meters) then the original breed and can be grown in closer proximity (3 meters apart). A mature cocoa plantation creates a low canopy effect, blocking out 70% of sunlight and creating dense mulching on the ground. This makes for ideal-growing conditions: it allows for less light competition; allow for good airflow; and the soil retains sufficient moisture.

Most cocoa trees reach their bearing age after 4 years, and will produce cocoa pods year round. The pods grow directly from the trunk of the tree, developing to be 15-25cm long. The average cocoa tree can produce up to 80 pods a year. Each pod contains approximately 30 beans. Once the cocoa stops producing its maximum yield the tree is cut down and replaced. Time is given for the ground to recover, by planting nitrogen, potassium and phosphorous rich plants. These nutrient rich plants are edible, which serves as an extra bonus for the farmer. Examples include plantain, banana, chillies, and cassava. It is also advised that cocoa trees are grown in and amongst other varieties of tall trees to protect them from extreme sunlight and to encourage bio-diversity. In Ghana especially, projects to help promote cocoa farming alongside agro-forestry have been extremely successful, producing high yields, extending the life of the trees and preventing the spread of diseases.

Even through the pods are cultivated year round, there is one main heavy harvest season, which extends from September through to December. I followed a group of Ghanaian cocoa farmers in Akimoda during this harvest period and I documented the process: 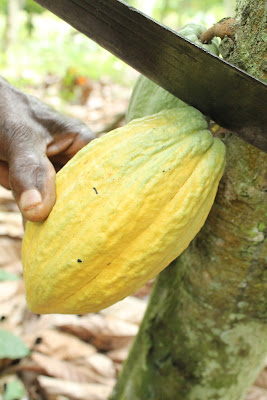 1.     The cocoa pods are collected. A machete is used to cut the pod away from the trunk cleanly and carefully, making sure the pod and the tree are not damaged in the process 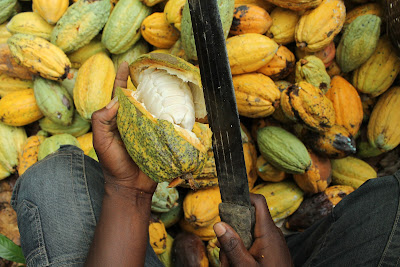 2.     The pods are split, again using a sharp machete, being carful not to damage any of the beans inside the pod. 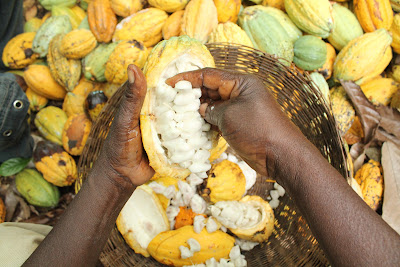 3.     The beans are covered in a sweet sticky white pulp. This is scooped out into a basket. The husks are kept and ground-up to be used as organic fertiliser. 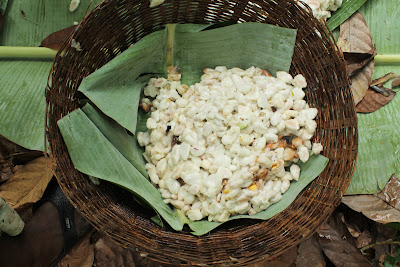 4.     The pulp is collected and loosely covered with banana leaves as not to allow any pests in, but still allowing sufficient airflow. The pulp is left to ferment for seven days, being mixed every couple of days. This process develops the chocolate flavour and colour. 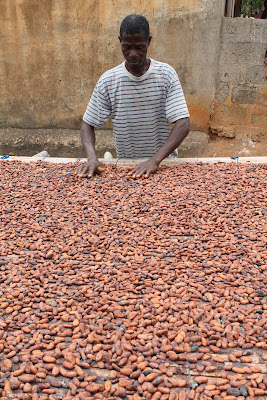 5.     The fermented cocoa bean is then spread out on to large drying racks where they are left for a couple of weeks, being mixed every few days. The slow drying process intensifies the chocolate flavour and draws out the moisture content.

The beans need to be fermented properly and dried thoroughly before they can be sold. Failure to do so could result in a contaminated/acrid tasting batch that will not be bought by cocoa buying companies. New geo-tracking systems allows for the COCOBOD to pick out areas where the process may not be followed properly. In this case, extra training and support is given to the farmers. 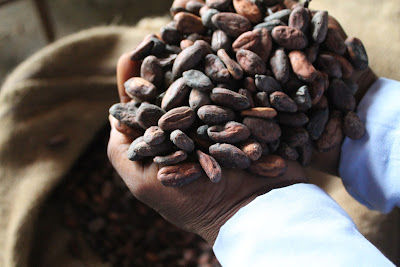 The farmer then takes his dried cocoa beans to the purchasing clerk who weights the beans and pays the farmer accordingly. When taken to the depot, the beans are dried for the second time to ensure consistency. The beans are put into hessian sacks, labelled and stored in the depot till there are enough sacks to make a journey down to the port.

At the port, the beans are sold to the government, and then sold back to the buying company before being loaded onto cargo ships. This is a necessary formality as legally all the cocoa in Ghana is owned by the Ghanaian government.

The cocoa is either taken to Asia or Europe to be processed into chocolate. The cocoa beans are taken to a chocolate press where the cocoa beans are first cleaned, de-shelled, roasted, blended (to neutralise the flavour) and ground. They then go through a press that turns the ground up cocoa nibs into three different products: cocoa liquor, cocoa butter and cocoa powder. To make chocolate, cocoa liquor and cocoa butter is combined with sugar and milk powder.

As cocoa powder is the by product, when the demand for chocolate goes up, there tends to be a great deal of cocoa powder that will also become available on the market, and this may not coincide with the demand of chocolate. Because of this the chocolate industry has had to find ways of balancing the markets. Cocoa powder tends to be used in cheaper quality processed foods and is even used in products to give an aroma of chocolate, rather then the flavour of chocolate. Cheaper quality chocolates will also use vegetable fats to substitute for cocoa butter during the manufacturing of chocolate, which is inexpensive and also easier to obtain.

So the story of chocolate is rather fascinating. My simple overview of the process is a glimpse into how chocolate comes from land to plate, but the story is a great deal more complex then what I have portrayed. Corruption, child labour, inequality, unfair prices, lack of farming inputs, access to resources, climate change, pest and diseases, are all issues effecting cocoa farmers in Ghana and around the world. Due to signing a letter of confidentiality I am not allowed to discuss this information on my blog. But I will simply say that as consumers we can make a choice, and an educated one at that. Don't be sucked in by false pretences and promises that large manufacturing companies are making. As these companies try to go ethical, we must question their objectives and fully look into their motivations. Only first hand observations can tell you the truth. What once used to be the food of the gods, has now turned into a commodity that is trying to be capitalised on by wannabe gods. I’m sure you know what companies I’m talking about…