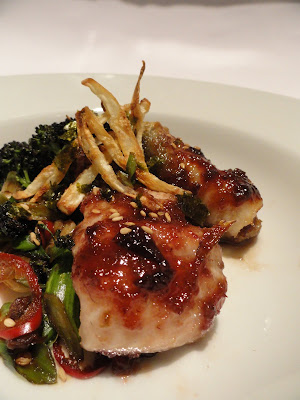 I have been trying to find eels for a while, and found it more difficult then it should be, especially living in South East London. I found out Billingsgate sold fresh eels, but the catch was… they came from New Zealand! Ridiculous. Eventually, after much research, I found a fishmonger near me in Nun-Head, who could find fresh water eels for me, from Ireland. I ordered one at a kilo for £21. Not too bad, it was big enough to feed four people happily. So I have had a BBQ sauce recipe in my head for a while, using only British ingredients. I have been dying to try it out, but on something that could handle the sweet/sour flavour, and eels are perfect for this. They have a rich, but not fishy flavour. They’re rich in omega 3 and have a firm flesh surrounded by a fair bit of fat, and a thick skin, perfect for barbequing.

I served the eels with stir fried broccoli and celeriac chips. Kinda English/Oriental fusion. It was absolutely delicious. I will defiantly be cooking with eel more often. It is difficult to get hold of, but good fishmongers should be able to order it with a bit of notice. It’s worth a try, especially as nutritionally it’s better compared to the more popular edible fishes. One word of warning though, the eel still wriggles about a good 30 minuets after being killed and gutted. Was funny at first, until when having a fry-up, I found my bag of eels had slithered behind me!

Add the damson jam, honey, mushrooms and garlic to a saucepan and bring to a slow simmer. Allow the garlic to cook off. Rub some oil on the skin of the eel, and place on a hot BBQ or griddle. Once the skin begins to crisp up, add the sauce over the soft flesh. Close the barbeque or place under the grill. Baste the eels with the sauce every 2 minuets. The eel only needs eight minuets to fully cook. Serve with celeriac chips. Sprinkle with toasted sesame seeds for added flavour and texture. 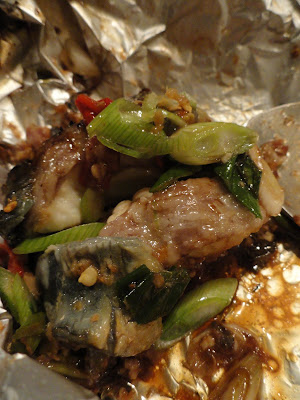 I decided to do an experiment and see how well eel steamed. So I wrapped 1/3 of the eel in tin foil with soy, ginger, fish sauce and sliced red chilli. This was surprising. Almost a like having cooked a whole different fish. The fish sauce gave the fresh water fish a saltiness, and skin just fell off. The fat of the eel ensure the flesh remained tender and flaky. Beautiful.

Pre-heat the oven to 180°c. Scored the eel on both sides. Leave gaps of 2inches between each score. Place the fish in a tin-foil bag and place on a baking tray. Mix the ginger, soy, fish sauce and chillies in a bowl and pour over the fish. Close the bag and place in oven for 30 minuets. Once cooked, garnish with spring onions and serve with sticky rice.
Posted by Unknown