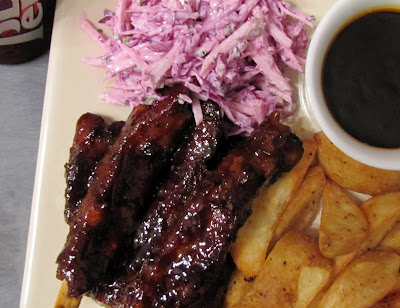 It’s surprising what you can do with cheaper cuts of meat. Chicken wings and ribs are sometimes seen as messy eating, and less desired because of the bone to meat ratio. My latest obsession… is ribs. I recall I starting four months ago when I discovered a good value Chinese/Japanese restaurant near me in New Cross. I had been in the studio all day and had been sustaining myself on lucozade and quavers. I needed some protein and some cards, and wasn’t really expecting too much on my tight budget. Maybe it was the hunger, or maybe it was the dark sweet and sticky sauce, but that was the day I feel in love with ribs.

Since that day, if ribs were on the menu, it would be on my plate. Salt and pepper, barbeque, dry rubbed ribs, smoked ribs, cider glazed ribs… and baby back ribs. All YUM! So I had heard of this technique of cooking pork with coke/soda, as it tenderises and sweetens. I’d seen Nigela do it, and I have been to a BBQ where it has also been done. But I wasn’t wholly convinced. Then, two weeks ago, I came across an artiocle/experiment on http://blog.ideasinfood.com/ideas_in_food/2008/02/dr-pepper-pork.html where belly pork was brined and cooked using Dr Pepper. The idea was genius, not only because Dr Pepper has a fruiter flavour then normal coke, but it also contains more sugar.

So I set about thinking up a recipe for Dr Pepper Ribs, and an acompliment of a sweet, crunchy and fresh apple ‘slaw:

Method:
Cut ribs into individual rib portions, rub and marinade in the dry rub with a drizzle of olive oil for 6 hrs or even better, over night.

Pre heat oven to 150° Celsius. Move ribs into an oven proof dish and pour ¾ of a can of Dr Pepper into the base of the dish. Cover with tin foil and place on bottom shelf of the oven. Allow to cook for an hour.

Whilst the ribs are in the oven, make a glaze. Pour one can of Dr Pepper into a sauce pan and allow to reduce on a high heat. Add the other ingredients and continue reducing until a sticky glaze consistency is reached.

After the ribs are cooked, there will be quite a bit of liquid at the bottom of the oven dish. Carefully pour into the sauce pan with the glaze, and heat up again. Turn the oven up to 230° Celsius. Glaze the ribs and place on the top shelf. Continue glazing every 4 minuets or so until the ribs are sticky. I served the remainder if the glaze as a dipping sauce.

Method:
Using the fine blade on the mandolin I grated the cabbage, apple and turnip. I poured the juice of half a lemon over to stop discolouring.

I made a dressing combining the chives, mustard powder, and the salt and pepper in with the crème fresh. I mixed everything up and served after keeping cool in the fridge for about and hour.
Posted by Unknown