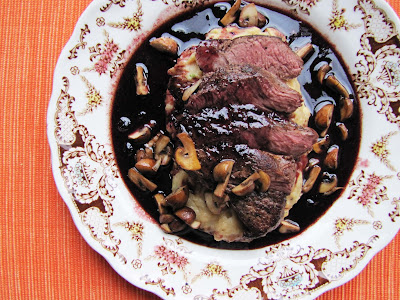 I personally think it’s shameful when British supermarkets import ingredients that are perfectly available in the UK and then sell them for a high price. The ingredient, or rather the meat that’s got my blood boiling is the humble venison. Gaining popularity and growing in demand with the health conscious foodie: venison is lean, packed full of iron and an unconventional but safe meat to impress dinner guests. Supermarkets have obviously picked up on this, and for a few years now have been stocking a range of venison products… from New Zealand! Yes, even though we have an ample amount of deer running around the British countryside, we still import the meat from New Zealand. It boggles my mind as to how this could be a cheaper option, but also, why there is no Bristish Venison on sale in our four largest British supermarkets.

So the following recipe has been inspired by the seasonal ingredients available to us at this time of the year (even though it’s been rather rainy) and have all been sourced locally, just to prove seasonality isn’t always just about fruit and veg:

Seasonal ingredients have a great way of complimenting each other. The recipe isn’t fancy, but just a basic, great tasting combination of flavours. Initially I couldn't decide between roasted or pureed parsnips, so I decided to puree roasted parsnips and have the best of both: the roasted flavour and the pureed texture. 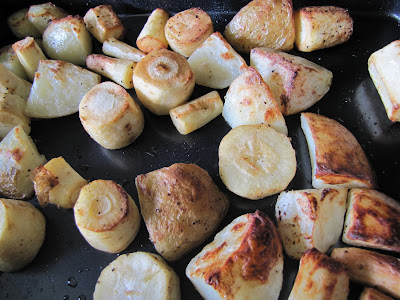 I can guarantee that most butchers or local farm shops will stock local venison. I decided to go the source and drove thirty minutes to Woburn, where I bought my venison from Woburn Country Foods. The deers came from the 3000acre of woodlands on the local Woburn Abbey Estate. The venison steaks were also half the price of New Zealand Venison steaks available at the supermarket… Go figure!? I’m unclear of the breed, but I was assured only seasonal meat is sold in the Farm Shop. 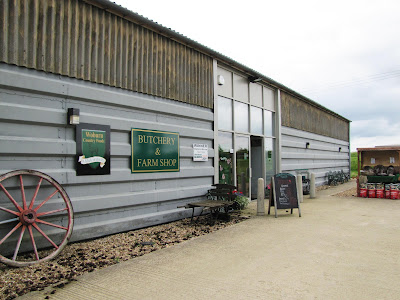 Method
Roasted parsnip mash:
Heat up a large pot of water.
Chop up the parsnips and potatoes into equal sizes, and once the water starts to boil, add the potatoes.  After five minuets, add the parsnips.
Meanwhile, turn the oven on to 200°c. Liberally oil a roasting tray, season, and add two whole roughly smashed garlic cloves still in their skins. Place in the hot oven.
Once the parsnips and potatoes begin to soften, drain and add to the hot oiled roasting tray and place back in the oven on the middle shelf.
After 40 minuets, the vegetables should be beautifully roasted.
Place the nips, tattys and the roasted garlic in a food processer, add some butter and milk then blitz till you reach your desired consistency. Be careful not to over work as this could result in a glutinous mash.
Add salt, pepper and parsley to taste

To cook the venison:
Turn the oven on to 180°c.
Heat up a frying pan, and add olive oil and some butter.
Once the pan starts to smoke, add the venison. It should only take a few minuets to brown on each side.
Once browned, place in the oven for about 15 minuets. This should give you a medium rare stake.
Leave for a further five minuets for a well-done steak. As venison is quite lean, it takes less time to cook compared to other red meats.
Leave the venison to rest under some foil before serving or slicing.

For the Sauce:
Add a glass of red wine to the pan the venison was cooked in whilst the pan is still hot. Reduce, then add the black current jam. Season and finally add a knob of butter if desired… I did.

Sautéed Field Mushrooms:
Add some butter to a hot pan. Add the mushrooms, careful not to crowd the pan. Season once the mushrooms turn brown.

It does require a bit of carful planning to get the timing right. I made the mash in advanced and heated it up just before serving. I had to add a little bit more milk, but the consistency was no different. The sauce and the mushrooms were made whilst the steak was resting. I slicing the steak as I thought it made the plate composition more appetising then plated up and served. I had a friend over for dinner, and as I always do after making something for the blog, I spend a good 10-15 minuets taking pictures form different angles, with different compositions, giving me about 40-50 images to look through. This time, because of my eagerness to tuck in, I only had five images…  I say no more.
Posted by Unknown