The day after the night before. I should have woken up to a banging headache. Fortunately I didn't. I felt pretty fresh. Maybe it was the clean air, or the quality of the brewed drink, or maybe even the amount of food we ate. I have no idea, but it wasn’t too bad. Great, because we started our day with… yep, some more burciak. Because it only lasts a week, we had to get through it all before it went bad. I didn’t mind, I actually liked the stuff.

For breakfast we had Perkelt, which was also on Patrick’s menu the day before, although we hadn’t had the chance to try it. It is a meat stew, in this case it was local venison, that has a tomato and pepper base and is served over halusky. This particular perkelt was made by Vlado, Patrick’s friend who, like me, has a passion for all things spicy. Nice! The perkelt was spiced with home grown naga morich chillies. It was the best thing I had eaten on the whole trip. The depth of flavour, the slight tang from the tomatoes and the kick from the chilli pepper was refreshing and vastly different from the other food we had tried in Slovakia.

I had to get the recipe. I knew my attempt to make perkelt would never compare to Vlado’s, but it was worth a shot. It was clear when talking to Vlado, that his process of cooking perkelt didn’t really follow a recipe as such, but rather had some important elements to it. For example, he stressed the importance of using pork fat instead of cooking oil. This changes the structure of the stew, so it is thicker and gives the whole dish a richer and deeper flavour. He also said that the peppers and tomatoes had to be cooked right down so that only the skins are left and the excess water from them evaporates. Also, for every kilo of meat a kilo of onions should also be used. (Recipe below).

So after breakfast, the day continued. Jess had to leave to go back to Budapest and there was a great deal of clearing up that needed to be done. Patrick and his buddies got down to this, whilst Laura and I went for a stroll around Stara Hora. The place seemed so different. People were packing up, shifting bits of outdoor furniture, and trying to sell their last gallons of burciak. There was also a massive clean up session that started and finished before we even had time to help out. It was incredible to see the village come together in a joint effort. On our walk, we bumped into Patrick’s older brother, who is also the mayor of the local village. Again in true Slovakian fashion, we were offered a shot of palinka, a bottle of burciak and some food. This time it was cold pork soup with vinegar onions. Weird as it sounds, it was really good.

We got back to the cottage to find ribs cooking on the the barbecue. We weren't complaining. A bottle of Jack Daniels was open and the burciak was put to rest (for a while).

Everyone was in a bit of a celebratory mood. The boys had been busy the day before, so didn’t really have time to enjoy the festival, although they did really well and took in nice profit. Some of the older guys from the village popped by. Stories from the festival were shared and a few laughs were had. I had no idea what was being said. I couldn't help but laugh anyway.

It got to that point in the night when everyone was getting a little bit peckish. So, Matush, Patrick’s friend set about cooking. A frying pan was graced with a large spoonful of goose fat, in which a potato pancake was shallow fried and topping with cheese and chives. A jar of pickles was opened and some more JD was poured. I remember wondering at this point when I had my last fresh vegetable. But I didn’t ponder on that thought for too long. 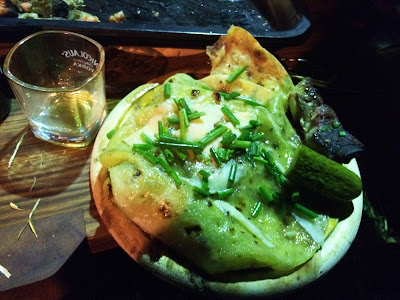 Vlado's Perkelt
So here is as the recipe as suggested by Vlado, and interpreted by me. Apart from ratio of meat to onions, I have not used measurements: