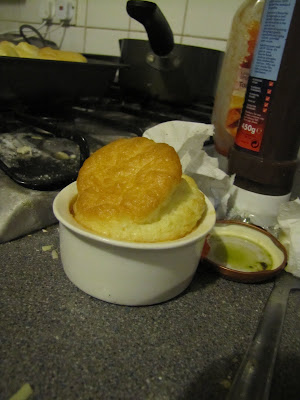 i had a horrible nightmare the other day... i stood in my kitchen with all the ingredients to make a souffle. my egg yolks and whites were separated, and as i began to whisk my whites, i realised all i had to whisk them was a bent fork! Horror! I stood over my whites trying to beat them to stiff peaks, but i was getting no where. Nightmare. My souffle was a disaster! Baack to real life and the following day i was watching ready steady cook, and a french chef was making souffle. Right! i thought, this is too wired a coincidence, i have to make souffle just to prove to myself i can. I'd never made it before, but knew roughly what went in and how to make it. I had goats cheese in the fridge, eegs, milk, flour, butter and some cranberry sauce! perfect. so i set about making my souffle... came to whisk my egg whites and i broke out into a sweat... shit! no whisk... this is gonna be a failure! "look in the middle drawer," suggested my house mate. There in the middle drawer lye a sorry looking electrical whisk, with one half of the whisks missing. this won't work. but i had no other choice. I fiddled around with it for a bit and made the lone whisk rotate at a very slow rate. i stood over my egg whites a whisked and whisked.... nothing happened at first, and i felt a da ja vu coming on. "give it a while" my house mate encouraged.so i did, and slowly but surely my whites started to double in size... Beautiful! great stuff, so i made my goats cheese sauce, added the yolk and slowly added it to my white. This is meant to be the crucial stage.. but it was a breeze. i filled my butter and parmesan coated ramekins and put it in the oven for 20 mins. 20 mins later, i had 6 lovely, fluffy and well risen souffles. Put some cranberry sauce on it and voila! They were very yummy. So ever since, i can't stop! i've been making camembert souffle, which is my personal favourite. Next i want to try to make a lactose free souffle with cauliflower and broccoli souffle using rice milk for lactose free friend who would otherwise never get to try souffle in her life. this is not acceptable.
Posted by Unknown