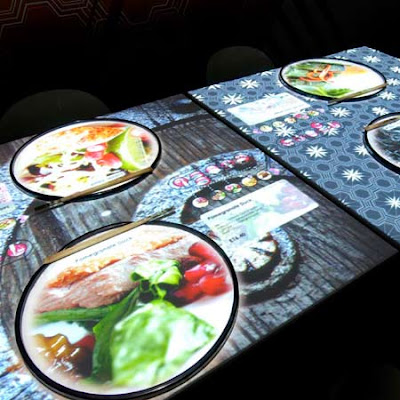 I had heard a lot about this new Pan Asian restaurant in Soho, which is supposedly the first ever, and maybe the only, interactive restaurant in the world. I looked up the menu online and liked what I saw, so decided to take my friend who was down in London for the weekend to Inamo. There wasn’t anyone at the doors to greet us, and it took a while for someone to show us how it all worked, but after a short demonstration, we didn’t have to call for a waiter until paying for the bill. Surprisingly there seemed to be as many waiters as there were customers.

The interactive menu was a little hard to navigate, and it was hard to compare dishes and prices. But the projection of your selected dish on your place mat was rather nice. Ordering food was really simple and reduces the time for indecisiveness. Whilst waiting for your food there were games to play, designs to pick for your table ambience, and even a chef cam. We were having so much fun with our interactive touchpad, we were surprised at how fast the food came out.

I ordered the Cinnamon Chicken with rice, my friend ordered the Black Faced Lamb which and rice, and we had the Crunchy Salad to share. The food was delicious. Like a lot of pan asian food, it was experimental and had some really interesting combinations like moromi miso and lamb.

Over all, it was reasonably priced (£50) between the two of us. We didn’t have space for dessert, but this was probably a good thing as all they had were ice-creams. I thought they would have some desserts which were equally as impressive as the rest of their menu.
Posted by Unknown