I like Bloody Marys, I can’t really see why so many people disapprove. Bloody Marys are not drunk enough in my opinion. I suppose the Bloody Mary is more then often the choice of drink for most middle-aged women or alcoholics concerned with their nutritional intake. It’s not very trendy, and requires a taste for raw tomatoes. It is disputed as to where the cocktail’s name actually came from; either Queen Mary I, infamous for her bloody killings; or Mary Pickford an early Hollywood actress famed for her red locks. I prefer the first, but highly doubt it, as cocktails were invented in America during the Prohibition, also around the same time as the beginning of Hollywood. I think a bit of history helps in gaining appreciation.

What goes into a Bloody Mary can vary. The best Bloody Mary I’ve tasted had: Tomato Juice, Vodka, Tobasco, pepper, wasabi, Worcestershire Sauce, lime, a salt rimmed glass and lots and lots of ice. I don’t understand why and where the celery stick comes into the Bloody Mary equation. I really don’t like raw celery, it’s rabbit food and should be left out. In my opinion it does nothing for the drink apart from getting in the way and tickling my nose with it’s spawning futile leaves. Why leave the leaves on? Is it so hard to chop them off? It’s impractical and a nuisance… in fact the whole stick is. Get rid of it. Leave it for making stock. Rant over… 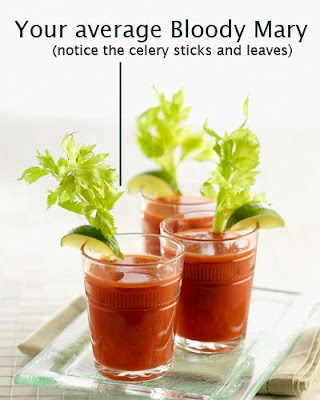 I want to show people Bloody Mary’s are actually great. But I need to serve it in a way people wouldn’t normally associate with a typical Bloody Mary, as the tomato juice and celery stick can be very off putting. So I’ve had this idea in my head for a while, but never really thought it actually possible to execute well. You never know till you try I suppose. I wanted to create an eatable Bloody Mary shot using cherry tomatoes as my self containing shot. To get the alcohol inside the tomato, I used a needle and a syringe. I bought this online, as it’s not possible to buy over the counter from the pharmacist.

So in my mixture went:

I had a few problems with the pepper, and had to result in grinding it up in a coffee grinder. I kept it in the freezer so it was really cold and an extra surprise when bitten into. It also makes the vodka easier to stomach and makes the spicier ingredients less intense. I was debating whether to heat the mixture up, but think it may be too strong, and could leave a nasty taste in the mouth. 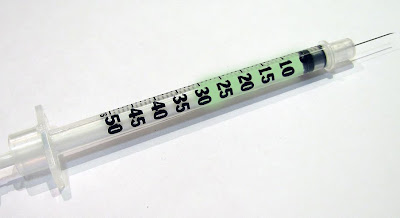 I injected the tomatoes, but had to be really careful not to over fill them. My syringe allowed for the maximum of 50ml. I put around 5ml in each cherry tomato depending on its size. I put a third of the tomatoes in the freezer, a third in the fridge and the other third served straight away. I wanted to see which batch tasted the best. 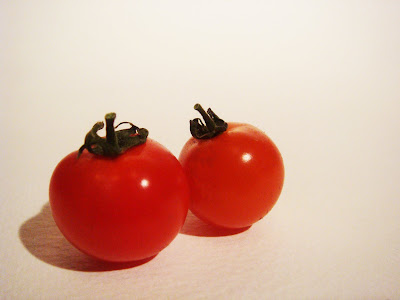 So I had my cherry tomatoes all set, but they didn’t seem special enough. I thought about how best to serve them and concluded, that, if they’re a bomb they need a shot glass in keeping with the theme in which to serve them. I thought some more and came up with the idea of a cannon shot mug. So I went about designing and making a “cannon shot mug”, big enough to contain an average sized cherry tomato. Okay… so I know cannons don’t shoot out bombs, but cannon bearings, but in this case my cannon shot mug contains a cherry bomb. Cannons and bombs are both instruments of distraction, and this is what I want to get across with my presentation. Lets say a bloody presentation for a bloody concept. After all, the Bloody Mary could have been named after the Queen of bloody acts, Queen Mary I. 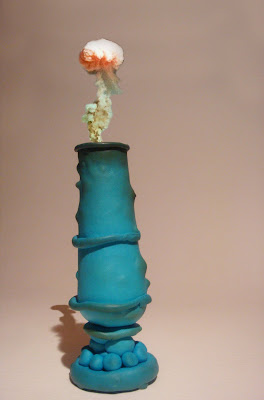 So I served it up to some friends, who found the whole think ridiculous… until they tried it. I don’t think any of my food has ever created such excitement. The first batch of Cherry Bombs were cold, and even after a while of sitting out retained its cold temperature. The fridge batch was the best, cold in the mouth and colder when bitten into. The freezer batch was way too cold for my sensitive teeth although the inside was brilliantly cold. There wasn’t quite enough to get drunk on, but it was fun and even more fun to see people’s reactions when biting into the Cherry Bomb! Happy Eatings : ) 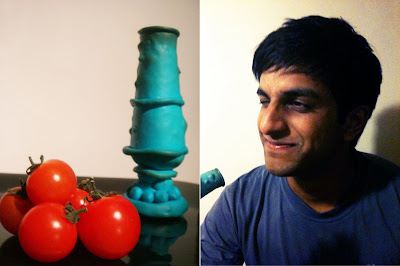