MY TRIBUTE TO THE KRABBY PATTY 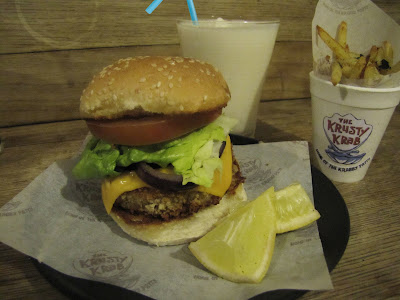 I’m a big Sponge Bob fan. This is no secret. I know there are many out there who, like me, are a fans of the show. This is for you guys, and a tribute to the pure genius that is Sponge Bob Square Pants and it’s nautical nonsense.

So after watching so many Sponge Bob Square Pants episodes, one starts to wonder what a Krabby Patty actually tastes like. Every time a Krabby Patty gets served up, I wonder, what really is in those brown beauties? The idea of cartoon food is appetizing and one hungry afternoon whilst watching SBSP, I thought I should try make one. I thought about it, and thought, and thought some more, and couldn’t stop thinking about how I was going to make this patty. I had to do it justice. I had to make something that would actually make me feel like I was having a Krabby Patty at the Krusty Krabbs. For those who don’t know, Sponge Bob works in an underwater Fast Food resturant called the Krusty Krabb, owned by a crab called Mr Krabbs. The Krusty Krab’s most popular selling burger (aquivilant to a McDonald’s Big Mac) is the Krabby Pattie. Sponge Bob is the dedicated fry chef who gets to make them.

After having watched so many episodes of SBSP I have subconsciously memorized the contents of the burger. Lame? No. So here it is: 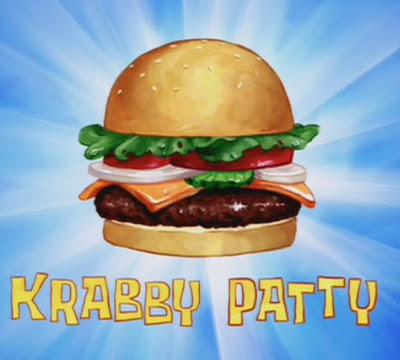 Okay, so I decided to go all out. I needed to find a recipe for a crab cakes suitable to put in this burger. I found a really simple and uncomplicated recipe for MaryLand Crab Cakes on http://www.crabcakeguy.com/crab-cake-recipes/. It looked simple enough, and that’s what I needed because there’s quite a lot going on in the burger, including cheese. From experience crab/fish cakes can have a few issues with holding together and keeping firm during the cooking process. It’s not pleasant to have a weak crumbly burger patty. It’s annoying and creates a mess. So I looked for a way to over come this. I have been told by my dad, putting raw onions into meatballs/kebabs/fish cakes etc weakens its structure due to the moisture released during cooking. A good way to get around this is by sweating the moister ingredients before adding them to the mixture. Another good tip is adding extra egg whites as it acts as a glue Delia suggests frying them for 3 minuets on each side (depending on the thickness of the patty) and to avoid disturbing them until the 3 minuets are up. 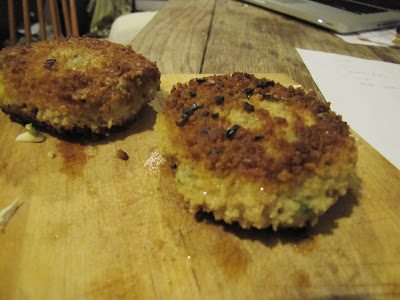 So the secret ingredient? Well, this is debatable. Many people believe there is no actual secret formula. It is said the missing secret ingredient is actually just love. This, I think should be the case for most food, and it’d be a huge copout to accept love. One of my “secret” ingredients was lemon juice. It cut through the bulk of the crab patty, and lift the flavors of the crab, which may be drowned in the sauce. Not so much an ingredient as a some times forgotten part of the burger ceremony had to be toasted buns. Toasting only the cut side insures the bun doesn’t dry out and fall apart. It also means it gets less soggy form seeping sauces. I am also going to sear the sliced onions a little as raw onions can be over powering. 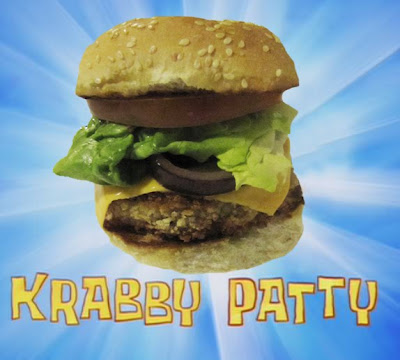 Also on the Krusty Krab’s “Krab Land” menu is Krabby Fries and Kelp Shake. This makes the Krabby Combo. I’m going to make normal deep fried fries but with a seaweed dusting. I always have problems with frying chips. Everyone has different methods. I am reading The Man Who Ate Everything, Steingarth, and he suggests the process of hardening. Like any strong iron, or steel frying pans would know, being heated, then suddenly cooled down and repeating this process a few times, results in a stronger material. This as it turns out, works the same for potatoes. So I peeled and sliced some waxy potatoes up into thin strips, washed and rinsed them under cold tap water for a good ten minuets. I fried them in sunflower oil in small batches on a medium high heat. I stained and de-greased them, then put them in the fridge for 30 mins. This was done three times. I crumbled up some nori seaweed and sprinkled it over the chips after the last fry. This acted as a substitute to both salt and pepper. 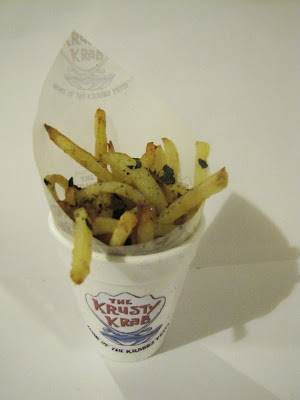 To drink? Kelp shake just wouldn’t have tasted very nice, so instead, I made a Kreamy Koconut Shake. I did this by blitzing together Swedish Glaze smooth vanilla ice cream with grated coconut and some full fat milk.

So the food’s sorted, but I wanted to go a little bit further. So I made some Krusty Krab Burger paper and a Krabby Fries Cup. The only thing that would have put me in a happier mood, would have been to watch an episode of Sponge Bob whilst eating my Krabby Combo, but instead, my house mate and my self ate our Krabby Combos whilst watching Eastenders. Happy eating!
Posted by Unknown