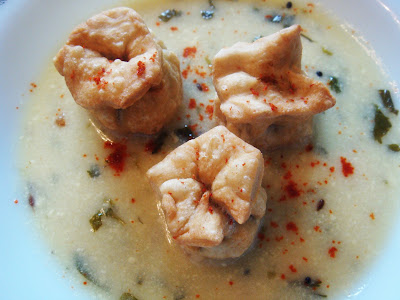 Kadhi is a north Indian soup dish typically eaten with a meal. It’s made from yogurt and gram flour and has a variety of spices in it to give it a distinct flavour. Every house hold has a different way of making kadhi, and a different concoction of spices that goes into the soup. When back home, we have kadhi a couple of times a week. Said to be good for your insides due to the yogurt, turmeric and spices, warm kadhi is also supposed to be a good way of cooling down in the hot Indian sun. Classic complements include dhal and pigeon peas. Kachori is a popular Indian fried snack; in my case only eaten on special occasions. A fried dough ball, with a range of different fillings including peas, dhal, or even meat. I decided I should learn how to make kachori, because I’ve found it rather hard to find a good enough ready made kachori. So I did some research and asked my mum how she makes her kachori. Her filling of peas, onions and mustard seeds are really nice eaten simply straight from the fryer. This is mainly because of the thin layer of pastry she manages to create, with a generous filling. But most frozen varieties have more dough to filling ratio resulting in a doughy, not crunchy surrounding, and therefore requiring ketchup or chilly sauce to dip in to making it less dry and easier to swallow.

So why combine the two? Well, it has never been done before, and when the flavour combinations are an Indian classic why the hell not? It could almost be like an Indian dumpling soup. I chose to fill the kachori with both dhal, peas and a variety of spices. Having just dhal or just peas as the filling would make it far too dense, so the combination would keep things more interesting and lighter on the palate.

So to begin, I had to make kadhi. I started of by adding:
8 Cups water
4 Cups of natural Yogurt
1 Cup Gram Flour
Generous Pinch of salt
1 Chillie chopped finely
½ inch of Ginger grated
2 teaspoons of turmeric 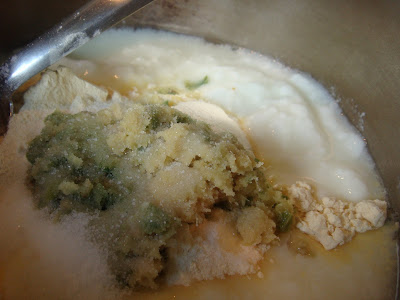 This has to be stirred or whisked thoroughly over a medium heat to prevent the yogurt from splitting and till the gram flour is cooked through. At this point the mixture will begin to boil. The kadhi will have thickened and taken on the consistency of double cream. The kadhi should be left to simmer whilst the spices are prepared.

So the list of spices to flavour our kadhi can be changed to suit individual preference. The spices are fried in ghee (clarified butter) in a separate pan. This is then added to the kadhi to give it it’s distinctive flavour. In my mum’s kadhi, she puts in order: broken cinnamon sticks and cloves; she then adds the cumin and mustard seeds till they start to pop; the garlic is added next till it turns a golden brown; then the asafetida; then the nim leaves and then the coriander. The kitchen will fill up with the most aromatic smell and just before the coriander starts to discolour, add it to the kadhi. The kadhi is then ready to be consumed. Add a little bit more salt if needed. 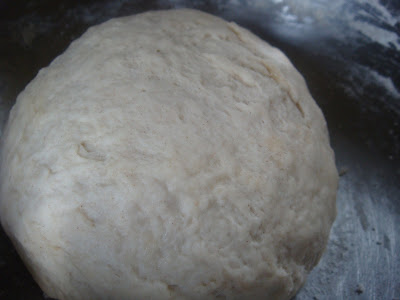 So whilst the kadhi sat, I got on with making the kachori. I started by making a simple dough of; 4 Cups Plain flour; 4 Tablespoons Sun Flower Oil; pinch of salt; and mixed together with warm water till a soft dough was formed. I left this for 30 mins with a cloth over the top.

So whilst the dough was left to sit, I got on with the kachori filling. I let a cup full of split dhal soak in enough water to cover for 10 minuets. I then added a cup full of frozen peas, aniseed, coriander seeds, cumin seeds and a pinch of salt to the dhal. I added ¼ of a cup of water and put in a pressure cooker to let cook for around 20 minuets. After the whistle blew, I let the mixture cool down then added some fresh coriander, mustard seeds and a little bit of chili powder. 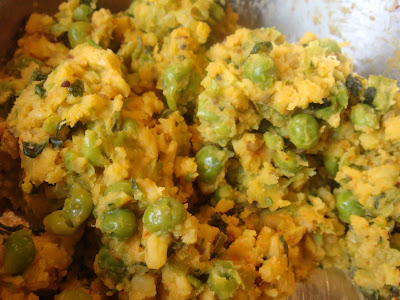 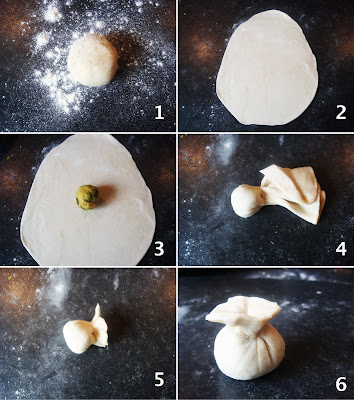 They don’t take very long to fry, approximately 6minuets, just till the dough goes crispy golden. The choice of shape is purely aesthetic. Traditional kachori is normally round but, you can be a little creative with this. Try and keep the pastry around it as thin as possible, so you don’t have uncooked dough after frying. It can be eaten just as it is, but in this case I rather enjoyed having it with the kadhi. Not only did they compliment each other will, but it was a more interesting way of eating two of my most favorite Indian comfort foods. Happy Eatings!