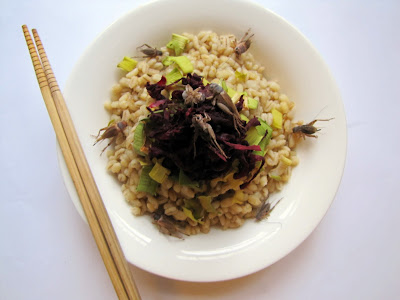 Pear barley is a great substitute for rice. Produced in the UK, it has less food miles then rice, and is healthier as it releases energy slowly. Beetroot and leek are both flavoursome and compliment each other well. Dehydrating, sound more difficult and nerdy then it really is. This way of cooking concentrates the flavour and can be done at home with a conventional oven. In this case, dehydrating the leeks and beetroot makes the dish less stodgy and stops the beetroot turning the whole dish purple. The crickets can be bought from pet shops or specialist bug shops. It “art” of eating insects is called enthomophagy, and is practiced around the world, but there is reluctance in the West. Many people have claimed that this could be the future of protein consumption, as not only are insets high in nutritional value and low in fat, but they are abundant and beneficial to the environment. Whilst it takes 10kg of animal feed to produce 1kg of beef, with locust, we see nine times as much being the outcome. 9kg of locust contains enough protein to keep a person sustained for just over a month. Insects can be cultivated at home, and need not be killed before eating. It is vital to feed the crickets on fruit or herby leaves for a few days before cooking. This gives them a nicer flavour. The day before cooking, place the crickets in the freezer, as this allows them to fall into a deep sleep, making the cooking process easier and preventing any guilty feelings.

Turn the oven on to 130 degrees Celsius. Place the pearl in a saucepan and cover with cold water. Place over heat and allow to boil. Drain, and rinse thoroughly under cold water. This washes of the starch and prevents the pearls from sticking to each other. Return the barley to the pan and cover with cold chicken stock. Bring up to the boil, then reduce and let simmer for an hour and a half, stirring occasionally. Cover two baking trays with greaseproof paper, and spread the beetroot on one, and the leeks on the other. Place on the bottom shelf in the oven, and leave the oven door ajar. After about an hour, the beetroot and leek should have turned crispy. For even dehydration, carefully move the small pieces around every so often. To cook the crickets, heat up some oil in a frying pan. Once the oil starts to steam, place the crickets in and cook for about 2 minuets on each side, depending on the size. Place on tissue paper and allow to cool. Assemble plate, and sprinkle liberally with the crispy crickets. The legs are especially delicious, as are the heads.
Posted by Unknown