Entomophagy: The practice of eating insects 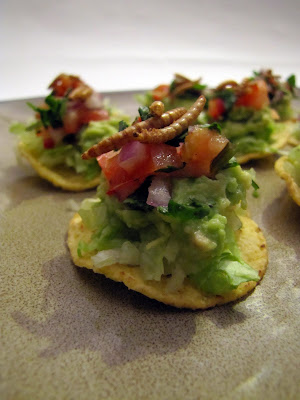 Encouraging people to start incorporating insects into their diet is tricky. Most people see it as novelty in the west. 70% of the world population is said to eat insects regularly. South America, Africa, Asia, and Australasia all eat insects as part of their protein intake. This is mainly because these continents all have large populations of diverse insects and arachnids. Entomophagy is not only considered a better source of nutrients and protein, but is also much better for food miles and the environment.

In developed countries, the average intake of protein per person is 80kg a year, in the USA, this is much higher at 120kg. In the developing countries, the number significantly decreases to 25kg. All figures are rising, and because of this, we need to reassess our protein intake. Traditional meat (beef, lamb, pork and chicken) when imported have massive food miles and release high levels of CO2. Most people tend to forget about animal feed also. For 10kg of animal feed, you get 1kg of beef, 3kg of pork, and 5kg of chicken…

So how are insects better nutritionally and environmentally?

For every 10kg of animal feed you get 9kg of locus
Insects need less space to be farmed
Insects need less energy and maintenance
Insects reproduce at a higher rate and in bigger numbers
A short life cycle – reached maturity quicker
Insects need 1/10 of the energy it requires to rear traditional farm animals
100grams of insects has as much protein as 150g of chicken
Insects contain, fiber, protein, sugars, minerals and even omega 3
In the UK we can eat worms, grasshoppers, ants, slugs, snails, larvae, termites & wood lice

Even with such impressive stats, the west is still a little bit sceptical about this ancient protein source. We eat insects everyday without realising: 1 in 20 dates has a caterpillar in it; muesli sometimes contains the larvae of varies beetles; food colourings made from the shell of beetles. The idea of eating insects can seems unhygienic, primitive, and even disgusting, but if this is the future of protein intake, we may have to change our perceptions of insects. It may seem drastic, but many scientists have looked into it as a way of solving the world food crises. Even if the insects aren’t eaten whole, protein and nutrients can be extracted and used in food manufacturing or to boost protein levels in food.

I’ve tried to come up with a welcome recipe for people who are unsure of the idea. Insects need to be farmed properly in order for them to take on a good flavour. Oven baking and frying insects results in a crispy texture, but a lack in flavour. I found these BBQ worms at edible.com, and thought it was a good easy way to introduce the idea of eating bugs:


I chopped the ingredients for the salsa as fine as I possibly could. I mashed the ripened avocado with a fork and squeezed lemon juice over it to stop it discolouring. I assembled… and munch munch munch! 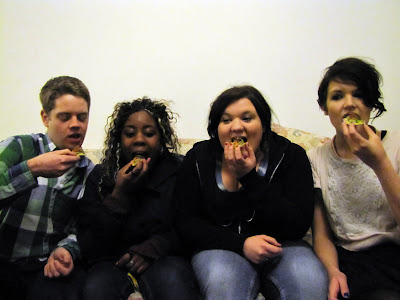 They went down well with my friends. I think they were easy to digest due to the salsa and avocado. The worms were more crunchy then anything. To get more nutritional value from them, I would have had to put twice as much on the top… one step at a time though eh?

With a new cuisine out there, I’m up for the challenge. Maybe the flavours need to be worked on as this is something so new, our pallets are not accustomed to the textures and flavours. It will be interesting to see how willing people can be to new ideas and new avenues for food.
Posted by Unknown