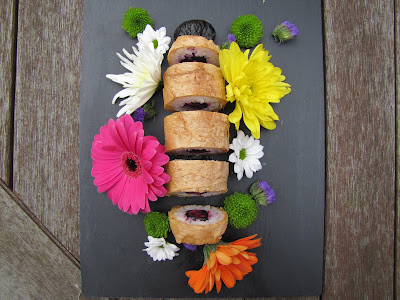 My recent interest in entomophagy isn’t everyone’s cup of tea. Most find the idea repulsive, other think I may come in time, and some have even re-thought their diet. In the last two months I have found it hard to get people seeing enotmophagy as a way of the future, rather then novelty. It will take a while yet, and one step towards this movement is a restaurant or a British based supplier.

My new area of interest is Protein Politics; where we’re heading with our obsessive protein consumption, and the coloration between wealth and protein intake/spending. I’ve been exploring possible future scenarios and designing objects or dishes which have a sense of irony to them. It’s almost designing for the future, but with a sense of humour.

I combined my recent ventures in entomophagy and mock meats to create my Mock Veggie Giant Wichetty. As possible as the idea of entomophagy is, I’m trying to question whether we will ever reach the point of exploiting this new protein source. Something that has been done for centuries, may become a large industry… maybe like beef, we end up in short supply?

My Veggie Wichetty is also rather mockingly resembles the almost cartoony mock meats, especially popular in Japan and China. Both my parents are vegetarians, and when living in Malaysia used to eat in Buddhist restaurants, where mock fish, poultry, pork and even beef was recreated using soya and mushrooms. They tasted very similar to the meats they were trying to imitate. They fish and prawns did look like they were taken from a Japanese anime. Here’s a link to veggie world, a restaurant and supplier of Buddhist pure vegetarian food in Milton Keynes.

My idea with this dish was to make something that resembles a Wichetty sliced, with a gooey, bloody inside… just like the type Bear Grills eats. It explodes all over the camera. Jokes:


Getting my Wichetty to explode would be a little ambitious. I thought maybe i could achieve this by using poached egg yolks, but i would run into difficulties when rolling. I instead settled for the bloody red of beetroot. 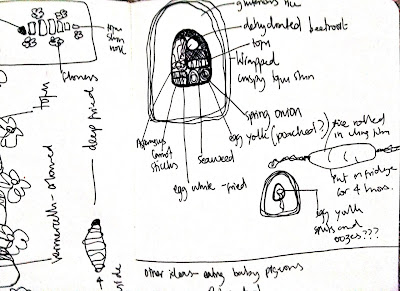 I tried to keep ingredients British and seasonal as much as possible. The filling is all from Tooting market: carrots, spring onion, grated beetroot, the tender stem of broccoli and egg (make into an omelette). I wrapped this up in Nori Seaweed sheets, into a tight roll. I then wrapped this is sushi rice, and cling filmed it up really tight, and let it in the fridge to set for a few hours. 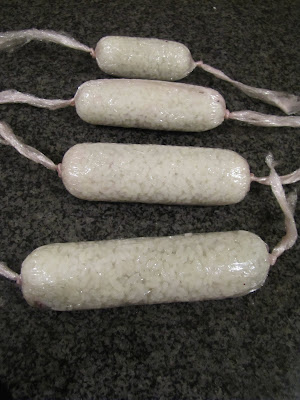 I tried to make Yuba (tofu skin), but this was fruitless. I think the fat content in the soya milk wasn’t sufficient, and didn’t form a proper skin. So I bought some from my local Vietnamese supermarket in Deptford. I soaked in warm water for five minuets. The texture is really bizarre, almost like thick human skin… perfect for recreating a crispy fried wichettty though! It takes a lot of patients, but eventually it was rolled up nice and tight. I brushed a paste of corn flour and water over the top, wrapped up in cling film, and left over night.

Lunch time the next day, and my beauties were ready to fry! The oil needs to be super hot, and it’s always better to use part old oil, and new oil when frying. I let drain, then sliced into my Yuba rolls. 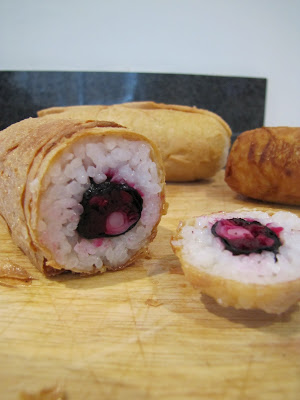 I plated it up and decorated with flowers. I used a cherry tomato, wrapped in sushi rice and nori seaweed with a glaze of soy, honey and chilli for the head. As comical as it looks, it tasted great. A had a selection of dips to go with it. The yuba is great to create a crispy, not necessarily healthy, but gluten free wrap. The whole thing has a very oriental taste to it… not wichetty really, apart from the beetroot, which has a slightly earthy taste to it. It was very fun to make. Time consuming, yes indeed, but well worth all the work and sourcing the ingredients. Happy Eatings : )
Posted by Unknown