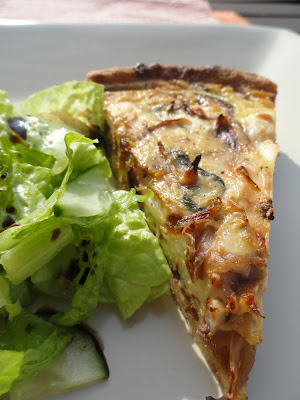 I started by making the pastry, by simply adding the flour, and butter to a food processer and blitzing till the contents resembled bread crumbs. I slowly added the water through the funnel whilst continuing to blitz. Once the mixture came together, I wrapper it up in cling film, and let set in the fridge. It’s essential, the mixture never gets too warm, as this can cause the dough to loosen up.

An hour later, and I started on lining my quiche tin. I heated the oven to 180°c. I then rolled out my dough, keeping things dry with plenty of flour on my work surface. Once the dough was an even thickness, and large enough to line my tine, I lifted it up with my rolling pin and gently placed over the tin. I carefully pressed in the sides and trimmed the edges. The lined tin was left to set in the fridge for 30minuets. I then blind baked the pastry in the oven for 15 minuets with baking paper and rice. After 15 minuets, I removed the rice and baking paper and allowed further cooking for 5 minuets. Once coloured and cooked, I poked the base with a fork to allow any air to escape when cooking the quiche.

Whilst the pasty was in the oven, I cooked my onions in some olive oil on a low heat, and allowed to reduce to half the size. This requires constant stirring and attention, as to make sure the onions don’t burn. Once just nearly caramelised, I added the basil, roughly torn, and the balsamic vinegar. I continued cooking for a further 5 minuets, until the harshness of the vinegar turned into a gooey sweetness. I seasoned, then added the onions to the base of the quiche. The three cheeses was roughly chopped and also dotted around with the onions.

In a separate bowl, I whisked up the eggs and the creamy jersey milk. I added salt and pepper, and poured the mixture in and around the onions and cheese. I mixed things around with a fork, so some of the onion and cheese came to the surface. I think it’s always nice to have the ingredients of the quiche visible on the surface, instead of sunken at the bottom. I placed the quiche back in the still hot oven at 200°c. After 15 minuets, I turned it down to 160°c for 20 minuets. This ensures a soft, well cooked centre. After 35 minuets of impatience, the quiche came out, to be cooled by an open window on a cooling rack. After it was cool enough to handle I took it out of the tin and sliced it up into generous portions, for all to share and enjoy : )
Posted by Unknown