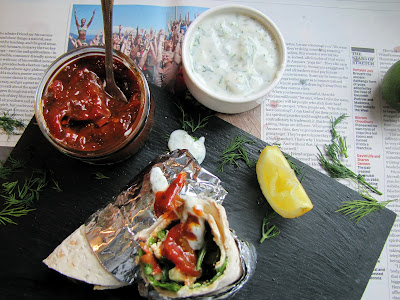 For those of you who have ventured down to Chapati Beach in Mumbai, you may well have had your eyes delighted with the colourful sights of neon lights, funfair rides, sparkly toys, and of course the street food. But as you may also have experienced, these all come with some kinda risk factor… and I don't think I need to explain why. The absence of sea-foods and meat is probably assuring for weary travellers, but dangers still lurk in and around the masala stained stalls. Pani Puri is probally the most risky of all street foods, due to the “pani” (water) component. The iffy tangy, spicy, brown, chut pani could be anything. But, in the eyes of most Indians, you haven’t lived till you try it. Find a Pani Puri Valla, place your order, watch in amazement as your puri is prepared for you, douse with the pani and quickly pop the soggy bottom beaut in your mouth. Once you pop, you will not be able to stop, the pani puri valla will be your best chum for the night.

Mumbai is known for its fast pace of life and for the huge diversity of people who call the city home, for this reason, it has probably the best variety of street food in the country. Mongolian barbeques, club-sandwhiches, dosas, pau bhaji, dhai vadas etc etc. All available 24hrs a day, on every street corner. The only time and place when rich and poor share the same taste. One such dish I have a close affinity to is the Paneer Frankie. Soft, slightly charred paneer cooked in the tandoor, along with peppers, onions, and tomatoes, wrapped in a light fluffy chapatti with a concoction of tangy, spicy and sweet chutneys. It isn’t just paneer that makes a Frankie, you can get a lamb Frankies, aloo Frankies, egg Frankies, chicken Frankies, or even aloo-egg-chicken Frankies. A simple but genius idea and a great way to use up left-overs, wrap the curry form last night in the chapatti from last night and sell it for lunch. Indians are very resourceful people…

… So being a resourceful Indian, I decided to ask my mum how to make home-made paneer, and to use the paneer in making a Mumbai Paneer Frankie. Instead of using peppers and onions, I chose to use local seasonal ingredients that my pure-vegetarian granddad could eat. I substituted onion with celery and radish, and the peppers with rocket, spinach and watercress. I also made two home-made chutneys: once tangy, spicy tomato chutney; and a cool dill and yogurt sauce.  So, I kinda pushed the boat out a little, but it was so very worth it, and now that I have learnt to make paneer, and have actually come to realise the difference in taste and texture, I will never… and I swear by this… I will never buy shop bought, pre-made paneer ever again. 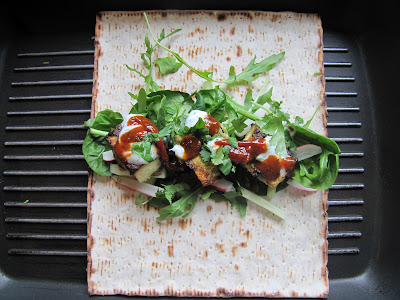 Ingredients:
To Make the Paneer:
5 pints of milk
Juice of two large lemons

Wrap of your choice. Chapattis are ideal, but flour tortillas are just as good. I used Swedish flat bread, just cause I had some that needed to be used up.

Method:
To make the paneer, heat up the milk in a non-stick pan, and wait for it to boil. Once it starts to boil, turn off the heat and add the lemon juice. Leave for ten minuets. Get a small holed strainer ready, and pour the milk mixture over. The curds will stay in the strainer and most of the whey will pass through. Transfer over to a muslin cloth (I just used an old cut up t-shirt) and squeeze out as much mater as you can. Leave it to hang over the sink if you can, or in a strainer till the paneer starts to firm up.
Take it out of the muslin, it should be slightly crumbly. 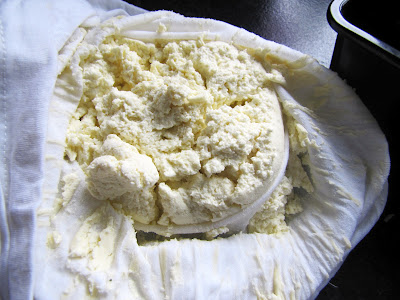 Place it into an appropriately shaped container and pack in tightly. Most of the water should have been removed before doing this. Weigh the paneer down with some tins of beans and place in the fridge for about three hours or even better over night to set.

Whilst the paneer firms up, make the marinade. Grind the chilli, ginger and coriander together. Mix into the yogurt, the mixture should turn a light, almost pea green colour. Add the garam masala. I love the colour contrast of the cool green of the yogurt and the dark brown of the spicy powder. Taste the marinade. It shouldn't be too hot, if it is, add some more yogurt. 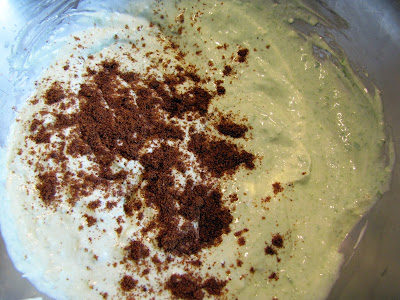 The chutneys can be made at this point as well, giving them enough time to sit in the fridge to cool down. The yogurt sauce is simply, the finely chopped dill and chopped chilli mixed into the Greek yogurt. To make the tomato chutney, heat up the oil in a saucepan, once the oil is hot, add the spices and dried chillies, and wait for the seeds to pop. Add the tomatoes and resist poking them, just swirl the pan around, so they hold their shape and don't realise too much liquid. Add the tomato puree, tamarind paste and the sugar. Once the tomatoes start to naturally break down add about a quarter cup of water and the vinegar. Bring to the boil then turn down and allow to simmer for about ten minuets, or until the chutney thickens. Seasona and taste. If the chutney is tangy, sweet and just slightly spiced, then it’s done. Leave to cool down, then place both sauces in the fridge.

The paneer, once firm, can be cut up into the ideal size, although, too large and they will not absorb enough marinade, and too small, they may just fall apart. It depends on how the paneer has turned out. In the image bellow you can see two different types of paneer, the ones on the right, are slightly yellow and look more crumbly, this is the home made paneer. The ones on the left are white and shop bought. I did this as an experiment to see if I could notice any difference in cooking and tasting. 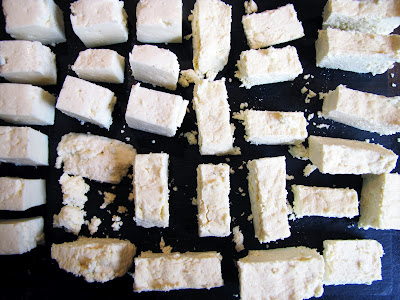 Marinade and place in the fridge for about 2 hrs. When ready to cook, heat the oven to 220° and place the marinated paneer pieces on a baking tray and on the top shelf of the oven. The aim is to get them slightly charred on the outside, but soft on the inside. As expected, the, shop bought paneer, being firmer, didn't have as much water content as my home made paneer. Becauce of this, the intense heat made the shop bought paneer rather dry. The home-made paneer released what I though was either fat or whey/water which when mixed with the marinade and turned the bottom side of the paneer crispy. This meant there was a very fine line between slightly charred and very charred. They were in the oven for about 15 minuets, and came out perfectly charred.

I very quickly and generously assembled the Frankie whilst the bread was heating up over the griddle. I rolled it up and chowed it down even faster. It’s great fun to make, and there are short cuts you can take if you don't have time to go through all the steps I took… although, if you love paneer as much as me, I highly recommend making it at home, it keeps in the fridge for a few days… and that only means an excuse to have paneer the next day as well!
Posted by Unknown