In my last week in the Philippines, I decided to make most of my little time left in the country and visit Tagatay, a popular country retreat for Manilites, and only a couple of hours away from the capital.  I’d been told of the town’s beauty, nestled along a ridge, overlooking the active Taal Volcano in the centre of lake Taal. The climate's cooler, the air is significantly fresher, the agriculture of the area is almost entirely organic and fancy holiday houses dot the lush landscape. With some of the country’s best hotels, resort and restaurants , Tagatay is a rather exclusive destination. I’m not an exclusive kinda gal, but as it was coming to the end of my stay in the Philippines, I decided to treat myself. 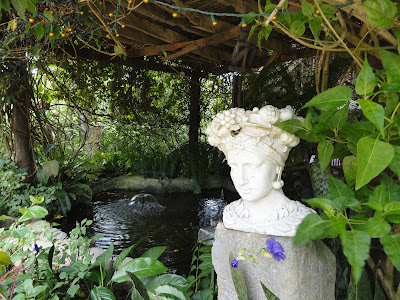 Unfortunately, we decided to go on a rather dismally wet evening. The “cool” climate was bitterly cold, and we were extremely under prepared. Clothes, bags and shoes soaked, we sipped our expensive beer and contemplated how we were to pass the next couple of days. We were told a trip to the Taal Volcano would be P2500 each, way more then we budgeted for. We were also unconfidently told that the Banka (traditional Philippino boat) ride to the volcano during the rough weather would be safe, as it’d be unlikely to sink with only two passengers - not really very re-assuring. Dismayed and cold, we planned on heading back to the city the next day.

On awakening the next day, the weather was much better although the beautiful view was still fogged over by thick clouds. We decided to make the trip to the volcano any way, turning down expensive guides, and making the journey by ourselves. We found a decent fisherman who took us over to the island in his tiny motor powered boat. On arriving to the Taal Volcano we raced up to the top, and watched (and giggled) as lazy overweight tourists with facemasks passed us on tiny horses led by “tour guides”.  As shameful as that was, even more shameful was a man at the top who offered us a 9iron club and 50 golf balls with the aim of swinging the balls straight into the mouth of the volcano!  When I asked him what happens with the balls, he told me he goes and fetches them out of the sulphuric lake with a friend every weekend... not very likely... Anyways, we stopped at the top, munched on a banana and took in the stunning view (which is way better on a clear day).

The banka journey back to main land was a race to beat the approaching storm… as the storm clouds approached, the water was wild and rough, the wind blew against our direction an it seemed like we were getting further away from our destination. This was probably the scariest, and wettest, boat journey I have ever made… and I’ve made a few. The boat bounced and rocked and groaned with every wave, the water slashed and slapped my body and face. The journey that took us initially 20mins to get to the volcano, took us an hour and 15mins to get back! We were extremely glad to get back on dry land. We tipped well and made tracks to the nearest drinking establishment to get over the traumatic journey.


The next day, we took things easy, our sore legs and cold bones deserved some TLC. We decided to treat ourselves to lunch at Sonya’s Garden, a well known B&B and Restaurant. Probably the only truly successful establishment in Tagatay that doesn't have a view of Taal Lake and Volcano. The attraction though, is their extensive garden and organic farm. I had been recommended to go here by many Manilites who all claim Sonya’s Garden to be the hidden gem of Tagatay. And that it was; a 20min jeepney drive out of town, then a 10min tricycle drive away from the ridge and down towards Bantangas, Sonya’s Garden is in a very unassuming location.

We had booked for lunch, but decided to explore the gardens before sitting down to our feast. The gardens seemed to roll on and on, with hidden green houses, relaxing water features, and a huge variety of exotic flowers and colourful birds.

We stumbled into some gardens that were strictly of limits to guests, and came across some dinning tables, which, I can only assume was for bookings for more intimate special occasions...

Sony’s Garden has accommodation, starting from P3000 (£44) per person to P5000 (£73). The houses/rooms are dotted around the gardens and are traditional Philippino designs with caprice windows and wooden interiors.

They also have a lovely spa, a bakery and a shop selling lovely organic beauty products and some local crafts.

Sonya’s Garden is known for their set lunch. A three-course meal that uses and shows off their ingredients straight from their farm and garden for only P600 (around £9). The dinning area is in a large, light conservatory with exotic birds flying free and chirping overhead… this nerved me a little, I’ve had bad experiences of seagulls when by the seaside in the UK, and pigeons in London, and was expecting a similar experience… but for some reason, the birds seemed docile and uninterested in all the food spreads below them.

The service was brilliant, and so very swift: Calamansi (small Philippino lime) juice was immediately brought out to our table, and this was quickly followed by our first course of flower salad, an array of toppings, and a basket of freshly baked bread.

The choice was huge… fruit, nuts, cheese, pesto and even sundried tomatoes. It was all so very delicious, that we forgot to keep space for our second course…

…Our salad was promptly replaced with pasta: tagliatelle and a selection of sauces and toppings: including salmon, olives, roasted vegetables, rich tomato sauce, mushrooms, Parmesan cheese and chilli flakes, all topped up without even asking.

We literally had no more space, and both agreed a coffee would be a more then sufficient end to the meal. But when deep-fried banana rolls, chocolate cake and sweet potato cakes were placed in front of us, we just could not resist a try. Sweetly delicious, but a little too heavy especially after our indulgent meal, it’s a Philippino’s delight, but my idea of too-much-of –a-good-thing = a case of servere indigestion. Instead of coffee, we were given Taragon tea. I had never had this before, and was pleasantly surprised at the pleasing taste and digestive quality. This is something I have taken away with me and now make after near death, decadent meals.

Happily stuffed, we headed back to Manila on the bus. A trip that started of rather bleak ended unexpectedly chirpy. It’s funny how the most unassuming place can have the most memorable lasting effects… especially when food’s concerned.
Posted by Unknown