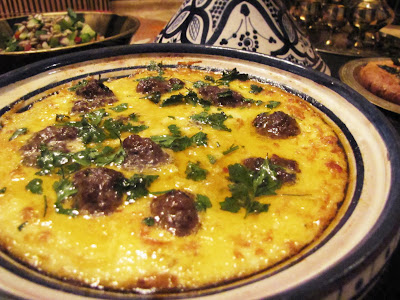 The one thing I have always longed to cook with is the Moroccon tajine. Before my trip to Marrakesh this summer, I had only seen the tajine on cooking shows or in the odd Moroccan restaurant in London. I believe the first time I had tried a tajine was at Sidi Maarouf on Edgware Road. It was a lamb tajine with sticky dates and almonds. The ceremony of bringing out the large beautifully decorated tajine, then having it opened in front of you, with the hot steamy aromas of the lamb being wafted over to you, and amongst the steam and simmering bubbles lies the meat surrounded by the most amazing looking self amalgamated juices. I knew then, that the lamb I was about to devour was going to be more special then any lamb had before. It was truely epic. It’s a way of cooking that has to be admired. The deign hasn’t changed for centuries. How does it work? Well, the cone lid isn’t just aesthetic. It increases the surface area for condensation. So as the contents steams and cooks slowly over a low flame, any evaporated moisture hits the lid then drops back down mix and basting at the same time.

When in Marrakesh I sampled a lot of different tajine dishes. I’m not going to lie; I did start to get a little annoyed at the lack of choice when I came to dishes cooked in the tajine. Such a perfect way of cooking but such lack in variety? So one day when wondering through the souk we were invited into a stately home which was also open to the public with a restaurant at the back. We walked in and were amazed at the sheer size of the place. It was a little dated, a lot of faded browns and lime greens trying to fit in with the original traditional Moroccan architecture. We were shown a few pictures of old Morocco and given a short history in the city’s development from the early 20th Century. The young boy giving the tour was clearly opposed to the booming tourism in Marrakesh and Morocco’s reliance on it for a stable economy. After the tour, I felt a little ashamed to be a tourist. I felt a little disgusted at having been sucked into a lot of what we thought was the “real” Morocco, but really, another money making scam aimed at tourists by deceiving money making Moroccans. After the tour, we were led to the Riad (court yard) where the resturant was and offered lunch. We accepted as it was a good chance to sit somewhere cool and out of the sun. Also beacuse it seemed like we were the only visitors they’d had all day, and they seemed like such nice people. So as we sat down and looked through the menu, I was glad not to see yet another chicken in preserved lemon tajine. There wasn’t much choice, so we ordered the Kefta and Egg tajine. I like a good kefta, and I was willing to see what they had to offer in the kefta department. Egg seems like an unlikely accompliment, but I felt a little daring and open to new things. I really had no idea what to expect. And like most things on holiday, the unexpected turned out to be truly memorable and a definite highlight of our eating experiences. And because of that, I felt it appropriate to recreate that very dish in my new fez style tajine. After much research and testing, I have come up with a dish that I think tastes pretty similar, if not a little better too.

To make the Kefta: 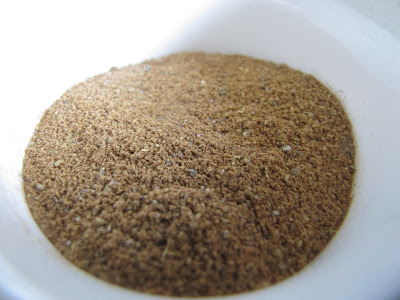 Firstly I got my dried spices and ground them all together in a pestle and mortar. I then fried off my grated onion in a bit of sunflower oil till it turned a nice golden brown. It’s important to fry the onion off properly as any liquids released whilst in the kefta will cause the balls to fall apart during cooking. I then added the spices with the heat off, but the pan still warm, so the spices didn’t burn. I added the parsley and let to cool by an open window. 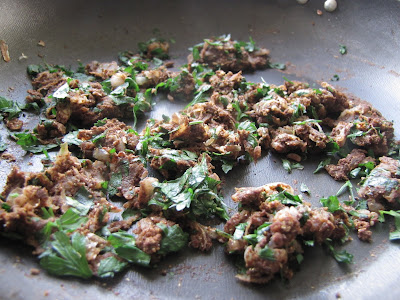 Once cooled, I added the onion mixture to the ground mince. Using my hands, I mixed it all together then left it in the fridge to sit whilst I made the sauce. 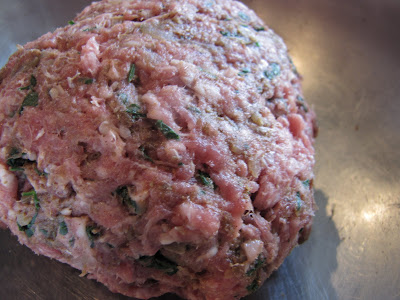 To make the sauce:

In a non-stick pan, I first fried off the onions, garlic, ginger and chillies in the ghee and olive oil till the onion started to turn golden brown. I then added the chopped tomatoes and tomato puree and cooked it off till the tomatoes made a sauce and were not so distinguishable as bits. I then added the dried spices; turmeric, cumin and coriander. Once I had cooked off the spices, I added half a cup of water and let the mixture come up to a boil before adding the lemon juice. I let this simmer for around 20minutes to allow all the ingredients to mingle, and get to know each other. As this happened, I got my mince out of the fridge and started to form little kefta balls no bigger then golf balls. I transferred the sauce into my tajine and placed the balls in and around the sauce. I covered it with the lid and placed it in a preheated oven at 170°c for an hour and a half.

I also made a Moroccon salad to go with it. The salad adds a nice crunch and is a quite refreshing side for a dish with a lot of spice. 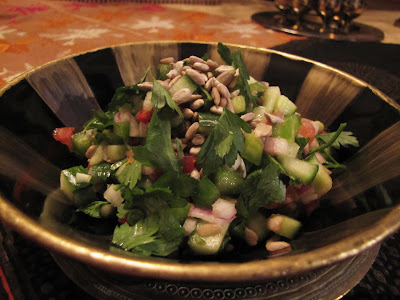 Mix all the ingredients together. Unlike most salads, it’s actually quite nice to squeeze the lemon and mix in the cumin and leave it in the fridge for a few hours. I wouldn’t leave it more then 6 hours though. 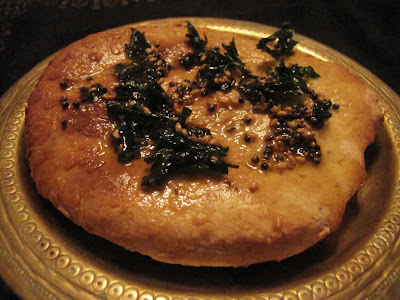 We also had cumin bread with it. Any bread is fine, even rice or cous cous would be good.

I got the recipe from: http://www.ichef.com/recipe.cfm/recipe/Alexandrian%20Cumin%20Bread/itemid/75238/task/display/recipeid/74901/recipecategoryid/36.

When cooking with a tajine, it is essential that the tajine is not opened during the cooking process. This requires a lot of patience. It’s pretty difficult to burn things with the tajine. Although, there are two different types of tajine: the heavier clay tajine, which is suitable for gas top cooking. This kind of tajine needs to be treated before use. As this kind of tajine is in direct contact with the heat, there is sometimes the chance of burning on the bottom. It’s not necessarily a bad thing though, as whist in Marrakesh, a burnt bottom was my favourite bit to scrape at with bread. I bought an oven safe tajine, which had already been treated and glazed. These types of tajines are lighter, and easier to transport back home. They are not suitable for gas tops, and therefore not exposed to direct heat, so not very likely to burn. The tajine is also very very hot when it comes out of the oven, and contains the heat for a good period of time, so care has to be taken. Especially when placing on certain surfaces, as I learnt the hard way (melted my plastic chopping board!) If you don’t own a tajine, it’s really easy to make most dishes in clay pots, or even in ovenproof dishes, just make sure it’s covered and sealed well.

The time came to removed the tajine from the oven. I opened the lid… and I can not even begin to describe how amazing it smelt. I poured the whisked eggs over the sauce with the keftas still poking through. I placed the lid back on and put it back in the oven for 15 minuets.

Once the egg was cooked through, I sprinkled a handful of chopped parsley over the top, and served. There was also the option of Greek yogurt for those who found it a little too hot. Personally it wasn’t needed. Like most Moroccan dishes, instead of being spicy, the dish was more aromatic. There were quite a few fragrant spices in the keftas that were echoed through into the sauce, and this worked really well. The soft bread and fresh salad worked as perfect sides. 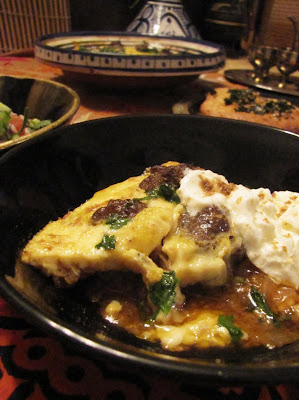 It defiantly took me back to the stately house in Marrakech with it’s 70s Moroccon décor and outdated furnishings, and it made me realise… this dish is oddly rather retro too. The whisked egg covering the unassumed sauce with the little brown keftas popping through. It reminded me of those gluten free pies I'd once and been appalled by in an Atkins cook book. Maybe the menu in the restaurant hadn’t changed since the 70s. I hadn’t seen this recipe in any other restaurant whilst on holiday. I even had a lot of difficulty finding it on the internet. A similar recipe with a whole cracked egg was more common, and understandably, but that’s not how I had it. Maybe this dish was popular back then with the beginning of tourism in Morocco, and maybe like the remaining charming interior, the menu is still stuck in time. A time that saw the beginning of change in Marrakech… for better or worse is debatable, but for the people who owned this stately house, they were clearly happy with the way things were.

As nice as the dish was, my soul purpose for buying the tajine is for its amazing slow cooking abilities. I don’t think it should just be restricted to cooking Moroccon food, but anything that would be good slow cooked – vegetables, joints of meat, casseroles, curries, maybe even soups. A whole world of tajine cooking awaits me and I’m really really excited! Happy Eatings! : )
Posted by Unknown