DRYING FRUIT… THE EASY WAY… AND SOME 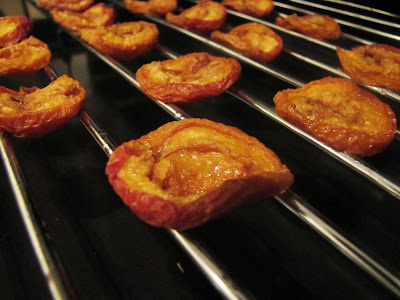 As Autumn comes around the corner, and as less fresh fruit is in season, a good way of preserving the tastes of summer fruits is simply drying them out. I’ve had quite a few apricots and peaches I bought from a local farm in Olney sat in my fruit bowl. I was planning on doing something with them, but just couldn’t make my mind up on what. So a few days passed, and I started to notice my organic apricots were starting to become a little over ripe. I needed to take drastic action. I didn’t want to make apricot jam, as it seemed clichéd and there wasn’t much left to the imagination after the jamming process. So I looked into other preserving methods, and drying seemed the most obvious. Now, the dried fruit you by from the shops tends to have been through a really long soaking and drying process, which I just didn’t have the means of recreating. They also then to have a lot of added sugar in them which takes away from the actual sweetness of the fruit. So I looked into other more traditional ways of drying, but this requited a hot, dry outdoor climate… not going to happen. But I could try and create a hot, dry environment with my oven. This, I found out, could be done by turning the oven up to a very modest temperature of 60°C and leaving the oven door slightly ajar. Also, to ensure the fruits dried evenly, they had to placed on the lower shelf, and straight onto the rack. The cooking process is long, and dependent on how big/dense the fruit pieces are and on how “dry” you want your fruit. All fruit before drying in the oven needs to be preserved in some kind of sugary preserving solution. In mine, I dissolved 1 part sugar and 1 part honey to some water. I placed on the hob till it bubbled and reduced. I then added the pitted and halved apricots and let them sit in the solution for 2 minutes. I removed and placed on my wire rack in the oven. I was initially planning on keeping them in the oven for 6 hours, but after this time, I realised I needed to push the fleshy part of the fruit up a little and let it dry out a little more for a further 2 hours. 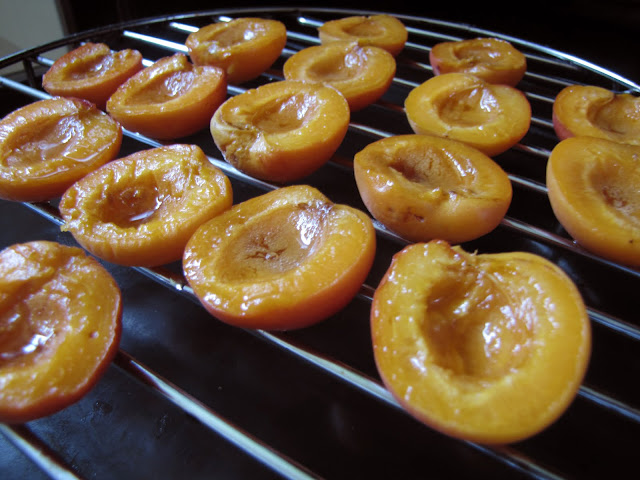 Long, yes. But it is well worth it. The flavours are even more concentrated and the skin becomes wonderfully chewy. My apricots were finished by 10 in the evening, and as I had a little munch on my dried fruit whilst watching Top Chef… I had a little brain wave, that just wouldn’t leave the circulating thoughts in my head…. Peach Meringue Roulade. I had all the ingredients… I needed to make it reality. Crisp, but spongy meringue, peach jam, honey vanilla cream, topped with flaked almonds and chopped dry, chewy apricots! I set about making it:

To make the meringue base, I whisked the egg whites till they got to the soft peak stage. I then whisked in the vinegar and gradually added in the cornflour and sugar. The meringue mixture is ready when I becomes glossy and very stiff. I spread out the mixture as evenly as possible at approximately an inch thick on a large piece of greaseproof paper, and then placed in the oven on the middle shelf at 160°C for 15 min. I then turned the temperature down to 110°C for a further 20 min. Once completed, I took it out of the oven to cool. 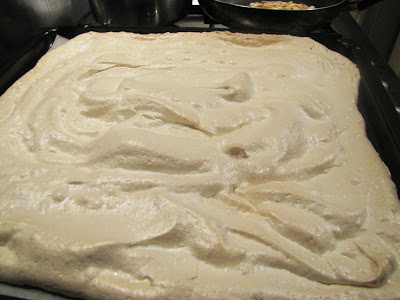 I firstly got my peaches and scored a cross on the bottom of them. I placed them in boiling water for a couple of minuets. I then removed them and instantly placed them in a bowl of iced water. This process helps making removing the skin a lot easier.

Once skinned, I chopped them up and placed in a saucepan along with the sugar and lemon juice. I read somewhere once, that to keep the colour of any jam, it needs to be cooked on a high heat, and very quickly. So all in all, once blitzed and allowed to bubble, I let it reduce and cook for no longer the 15 minuets. I let it cool by an open window. Once cooled, it becomes more viscous and more jam like. I spread this on the turned-upside-down meringue. 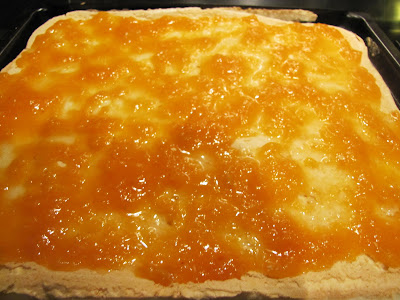 Dried fruit:
I decided to chop up some of my dried apricots to use in my roulade. So I carefully removed, chopped and separated the chewy skin parts and the fleshy inner parts for the apricots. The skins to be used as a topping on the roulade, and the fleshy part to be mixed in with the cream. 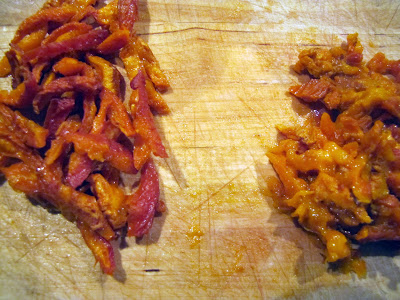 I whisked the cream and crème fraiche together till it became thick. I then mixed in the vanilla seeds, the honey and the apricot halves. I slowly sieved in the icing sugar which I thought I decided to add to give the cream mixture more stiffness… but it became a little more watery at this stage which was worrying. I let it set in the fridge for a good half hour, and nothing changed. It was getting late, so I decided to pour the cream out over the meringue anyways and let it set. I waited another 30 minuets. 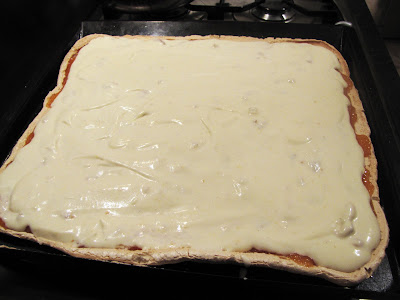 The time was coming closer to 2am, and my patience was running thin. I was starting to feel a little tired and run down by the long cooking process. Surely I had the patience to wait, especially after all this hard work… 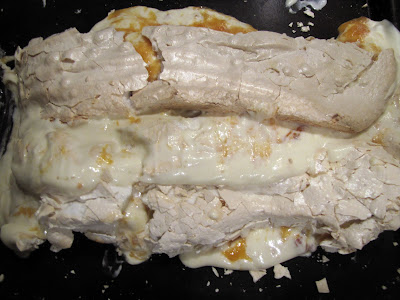 What can I say. Impatience got the best of me. It was purely a moment of impulse, and if I was thinking straight I would have known, Icing sugar takes a good hour to set properly. I knew it was a destructive reckless moment and there was no way of mending my now very sorry looking roulade. 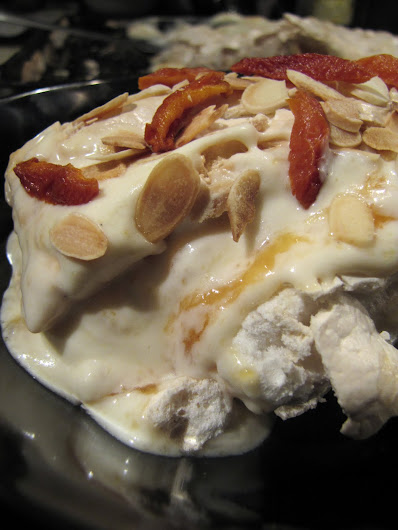 I was very very upset, but all I could do was make best of what I had. So I plated it up as well as I could, sprinkled my toasted flaked almonds and dried apricot skins over the top. It didn’t look very nice, but it tasted absolutely delicious! It was tangy, sour, creamy, crunchy and so very naturally sweet. They honey and vanilla cream complimented the peach jam very well. The meringue sponge was the right density, but still lovely and crisp on the outside. It was lovely. I think next time I will have to either exclude the icing sugar… or just be more patient, as the next day when I opened my fridge to get some milk, I noticed the cream in the roulade had set nicely to the right consistency… oh well. Made a nice change from Weetabix for breakfast. Happy Eating!
Posted by Unknown