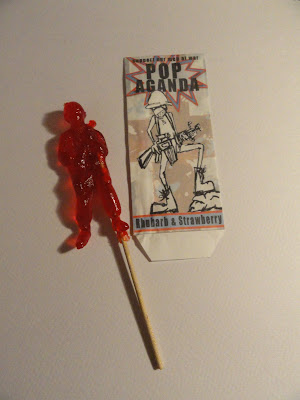 So, I’ve been really interested in a supposed World War 3 situation, and how we would cope with it. The reduction of imports would mean exotic ingredients wouldn’t be so readily available. Our dependence on locally grown, seasonal and preserved foods would grow. Government propaganda would also surround us, encouraging us to support the choice of war. As you can imagine, a WWIII would be significantly more devastating compared to previous wars. With nuclear weapons and chemical war fare destroying cities with a simple touch of a button. I’m pretty sure, a war on this scale would last for many years, with the consequences being way bigger then ever seen before.

So with all this horror, I came up with a subversive product which the British Government could realise: Popaganda. A lollypop, which bought by kids, would encourage and condition them for war. The lollypop shaped like am army man, would be handed out to kids as a treat. Maybe this sugary treat would lift the moods of children, whilst also being a pre-training for war.

I looked into different flavour combinations, and from reading an extract by Edmund and Dixon, American food writers from the 1800s, I found the combination of rhubarb and strawberries, created a mock Pineapple flavour. This flavour combination could be used in other possible foods and drinks from tarts to cocktails. 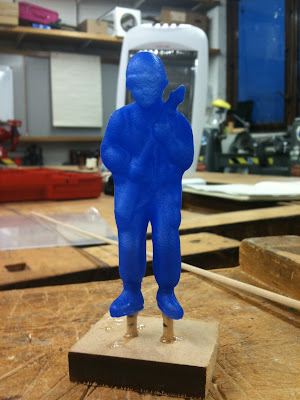 I needed to make a casting, so I could make a lollypop shaped like a solider. So I got my mould of a solider from a toy army man. I stood him up on a plinth…. 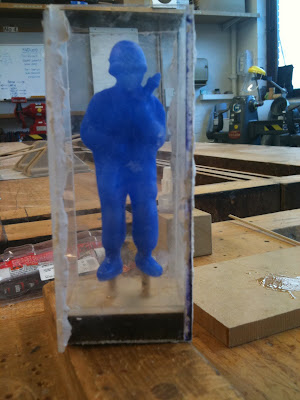 I covered him in a box of clear acrylic. (It wasn’t a perfect box by any means, so I needed to seal up any gaps with some plastering.) 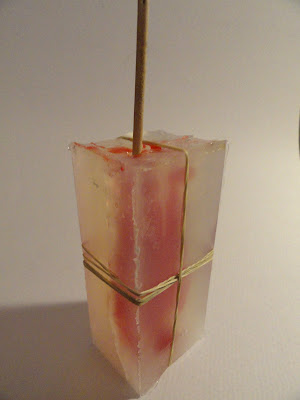 I filled it up with rubber silicon and let him set for a good hour. Once removed from the over, I broke of the acrylic, cut down the sides, so to create the male and female parts of the mould. I filled it up with my sugary rhubarb and strawberry mixture (This was very difficult, as I made the mixture without using a sugar thermometer. I do highly recommend getting one if making any kind of sugar craft). I let it set for 20 minuets, and then removed from mould. 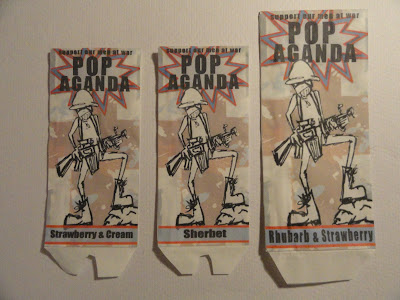 I also made a wrapper to go with it. I used the net, of old ice-lolly wrappers. They seemed well suited. I was in a bit of a debate, as to weather I should have called the flavour pineapple, or Rhubarb and Strawberry, but in the end, as the colour I chose was red, I decided to stick with the latter. I also came up with a few other possible typical English flavours like sherbet and strawberry & cream.
Posted by Unknown