Umami is said to be the 5th taste along with sweet, salty, sour and bitter. Umami, is hard to describe best many do by calling it subtly savoury. Umami was first discovered by the Japanese scientist Dr. Kikunae Ikeda of Tokyo Imperial University in 1907. He did some research into why dashi (a Japanese stock made from Kombu- a type of seaweed), tasted so good. He found that Kombu was high in glutamatic acid, and this was the what gave dashi its delicious flavour. Dr. Ikeda termed this distinctive flavour, Umami. With further research, a wide variety of foods from around the world were discovered to have high levels of glutamatic acid: like tomatoes, anhovies, beef, asparagus, green tea, mushrooms etc. 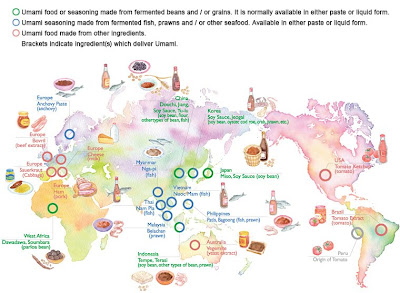 “Those who pay careful attention to their tastebuds will discover in the complex flavour of asparagus, tomatoes, cheese and meat, a common and yet absolutely singular taste which cannot be called sweet, or sour, or salty, or bitter…” - Dr. Kikunae Ikeda

Dr Ikead, successfully managed to isolate the glutamatic acid from kombu, and from this created sodium glutamate, better known as Monosodium Glutamate. The company Dr Ikead worked for, the Ajinamoto Coperation, took this discovery forward and produced a marketable product. Ajinamoto was sold as a flavour enhancer and spread world wide. Being cheap and as readily available as salt, the product was much welcomed in less developed parts of the world. Places where harvests were less predictable, and where the range of ingredients were limited. 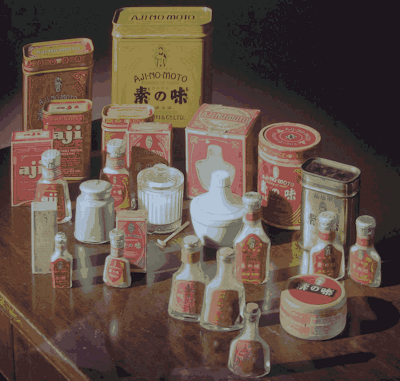 There has been a lot of bad press surrounding MSG, and this tends to be because of its use in manufactured products. There are no serious or harmful effects from it, although claims of migraines have been reported, but this is due to high levels of consumption. Until recently, MSG could be bought in supermarkets, but due to our change in food attitudes, this is no longer available. Many restaurants, though, still use MSG as a way of keeping the level of food consistent. This is an example of a great discovery taken out of context. We have very little room for “unnatural” ingredients, but if we were put in a situation where we had limited food, and a lack of choice when in came to ingredients, would we too re-think an ingredient like Monosodium Glutamate?
Posted by Unknown

Email ThisBlogThis!Share to TwitterShare to FacebookShare to Pinterest
Labels: umami