Vegetarian Manchurian, making the best of left over Chinese 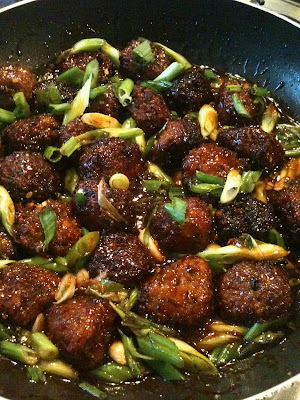 It’s really annoying when you order food online/over the phone, and what you get is not exactly what you expected. It’s even more annoying when the take away can charge ridiculous prices for their food because they’re the only restaurant that deliver in the area, and accept card. Anywho, so I believe one has to at least try and make most of a shit take away. So when I had loads of disgustingly sweet Kung Bo “Seasonal” veg and fried rice left over from my Chinese take away last night, I thought even though it was shit, I was going to try and rectify it by turning the two very dull dishes into one very excitingly tasty dish: vegetarian Manchurian.

The kung bo “seasonal” veg already had in it (nothing seasonal at all):
Cashewnuts
Pineapple
Pak Choi
Mushrooms
Carrots
Water Chestnuts

I drained the veg of the horrible sauce, and to add a bit more flavour, I added:

I blended all the above in a food processor. To make the mixture thicker and well bound I added some rice flour. I used a teaspoon and shaped the mixture into roughly formed balls. I deep fried in batched of 8, careful not to over crowd as this can cause sticking and could also mean lack of colouration. I wanted the rice in the mixture to give the balls a dark brown exterior, and a nice crisp coating. When cut open, they should retain a moistness, although the rawness of the rice flour should be cooked off. It’s essential that the oil be kept over a consistently medium flame and that the balls be around the size of a golf ball. This should ensure well-cooked Manchurians.

To make the sauce, I fried some thinly sliced garlic and chilies in some oil till the garlic started to turn slightly brown. I then added some Saracha sauce, light soy sauce, and honey. I let the mixture bubble and reduce till it became a sticky constancy. I added the Manchurian balls, turned the heat off and rolled the balls so they were coated. I didn’t want them sitting in the sauce for too long as they would start to absorb the liquid and lose they’re crunchiness. Lastly I garnished with a healthy hand full of spring onions.

I personally think as a dish, it can be eaten by it’s self, but just to bulk it our I had it with some left over noodles from the night before…. Happy Eatings : )
Posted by Unknown