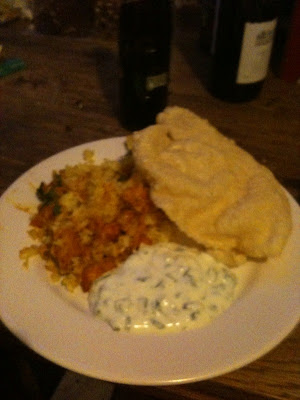 I've been missing my mum's cooking recently. I've eaten all her frozen dhal. No where near me does good enough Indian. So i decided after yet another dream about food to make biryani. I have attempted it before, but never properly with saffron rice. From the moment i got up that day, i couldn't stop thinking about this biryani. the whole day i was planning my masterpiece. I know what makes a good biryani for me personally. i was adamant to make the best biryani ever! so, a good biryani to me? Chicken in a medium dry sauce, mushrooms, cashew nut, loads of strips of ginger, garlic and chillies (strips are vital), saffron and cardamon rice, crispy onions and coriander to garnish. but most importantly spice. All the biryanis i've had as a child have always been immensely hot. i think it's a good way to introduce people to the indian way of 'hot hot... cool'. basically this is when you eat something spicy, then eat something else that's spicy but is in a milk product. example, spicy bombay mix, then drink some spicy chai. bombay mix is spicy, the tea you drink is spicy and your mouth gets really hot, but the milk cuts the heat almost immediately after and you get this tiny little sense of relief. so you do it again. so with the biryani, i decided to serve a coriander, coconut, and chilli raita.

Saffron rice;
1/2 cup milk,
1/2 cup water,
saffron,
cardamon
i cooked this earlier on an let cool. this meant the rice wasn't too wet before going in the oven, so it'd properly crisp up.

Chicken curry:
Thinly sliced onion,
thin strips of garlic,
ginger
chilli
cumin powder
coriander powder
garam masala
cream
fry thinly sliced onions in butter and oil till nearly golden. Add the ginger, garlic and chilli and cook with onions till golden. add the cumin and coriander powder. Add the chicken and let cook. then add the garam masala, cook off then add one cup of water and let it simmer for 30 mins on a low heat. Stir in the cream.

i let the chicken sit for another hour till heating it up again then placing into a deep oven prof dish.i removed to cardamon pods from the rice and spread it on top of the chicken. i placed it in the oven for 20 mins at 200c.

i fried some thinly sliced shallots and some coriander(carful cause it really spits)and let dry on some kitchen towel, then sprinkled over the biryani.

i fried some poppadoms and had some cold cobras in the fridge. i plated up and was ready to take a pic for the blog... but my camera ran out of battery. Used a house mate's phone to take a pic... but cause i was so hungry and the food looked so good. so i apologise cause the photo is pretty bad. But i really recommend trying it.
Posted by Unknown