THE WILD SIDE OF TV DINNERS 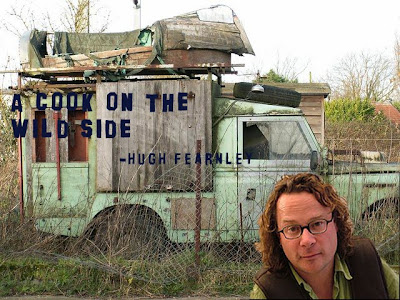 Not all food programmes are bad. Hugh Fearnley’s River cottage is good, or should I say used to be good. When he first moved to Devon and lived in his little cottage… and actually made mistakes. When his home grown veg didn’t grow as expected, when fishing trips were fruitless, when his chickens were broody, and when the camera shots weren’t so choreographed. This is the human Hugh I miss.

So you can imagine my delight when I found A Cook on The Wild Side and TV Dinners on channel 4OD! I was so very happy. For those who don’t know, these were Hugh’s first ever TV programmes. Made in the 90s, A Cook on The Wild Side, was when Hugh left his life as a successful London chef and hit the road to discover the foraged goods of the UK in the most ingenious automobile ever. His ‘van’ contained a compact kitchen, come living space. For hot summer days it opened up to the outdoors. On the back of the van (and I think this is the piece de resistance) he had a bicycle, which when placed stationary and the paddles were rotated, it generated a fire on which he could cook his found foraged goods. Genius. So on his show he travelled the length and breath of the great British Isles. He picked heather in Scotland, made termite patties on his canal boat (another fantastic mode of transport employed by Hugh), he even went bin diving in London. I can not tell you how good this programme is. It’s a shame there is nothing similar to this especially when we all seem to be short on money. We seem to forget nature is our local super market…. And it’s free. Even London has places to forage.

Another gem on 4OD is TV Dinners. A great idea, where Hugh helps out at different people’s dinner parties. Real people, and some wacky dinner ideas. Again, made in the 90s, but not at all dated. A futurist’s dinner part, a hippy wedding, a Chinese New Year dinner, cooking a trout in the sink (and it actually works!), he even cooks human placenta! I can’t stress how great this show actually is. It’s so entertaining, I watched 5 hours straight. The best thing is, we rarely get to see into other people’s kitchen, and their secrets of cooking. There are some great tips and some really interesting recipes. The problem with TV chefs, it’s the same people/chefs, same ideas and they seem to follow the same trends. But when TV cooking programmes go into people’s homes, you see the many different ways of cooking, most of them passed down through their families. The best part of the programme is when the food is shared with their dinner guests. This is what food is about, sharing. Even if it’s with one other person, it’s what all those hours in the kitchen were spent labouring over. Good food, made with passion and love : )
Posted by Unknown