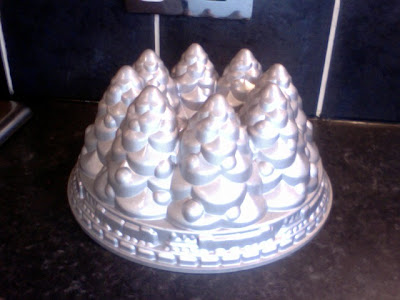 I recently bought a Bundt cake tin online. I’m not much of a pastry cook. I’m far too impatient, always get measurements wrong and I find the whole process too slow and laborious. So why did I buy a Bundt tin? Because they are beautiful bits of kitchen ware. They come in so many different shapes and sixes and the shiny metallic moulds are so attractive. Bundt cakes are originally German and were called ‘Bundt’ because in German Bundt comes from the word Bundtkuchen which means to bundle/wrap around. Bundt cakes have a central hole which the batter is poured around. I don’t know why this is exactly, but it does means you get a nice hard coating around the cake, and the hole means more external surface area for more of this nice hard coating.

Bundt cakes were originally eaten during the German harvest, and were cooked in heavy cast iron pans or delicate ceramic which meant it was rather difficult to handle and the cake often came out unevenly cooked. Then a Mr H. David Dalquist (an American) decided to take this nice ‘bunt cake’ idea and improve it. So he started a company called Nordic Ware, which made bundt cake tins from aluminium, which meant they were easier to make and the cake also cooked more evenly. The aluminium also means more interesting shapes can be tried out. Like my Holiday Tree Tin. This is a very different design to the Bundt tins available before Nordic Ware. 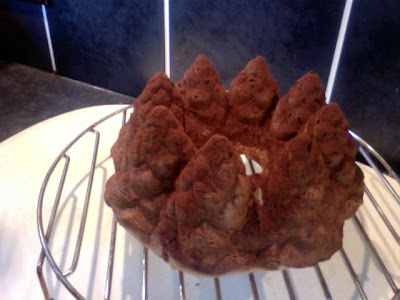 So, I can’t have a beautiful cake tin and not use it really can i? So I looked in my cupboards and found crunchy peanut butter and sneakers…. Oh yes! A Sneakers cake! Made the recipe up from the top of my head baring in mind what I had available in the house… and for someone who doesn’t like making cakes, I think I did rather well.

Greased the tin…. Put everything in together into a mixer…. put half the mixture in my tin....cut up my sneakers bar and placed it around the tin... 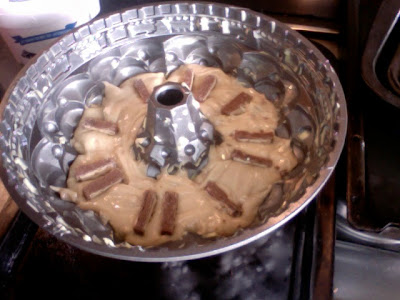 poured the rest of the mixture over the top....and cooked at 175c for 35 mins in a fan assisted oven….Took out of oven to cool in mould for 10 mins…. Took out of mould and placed on cooling rack… had a sneaky taste whilst still warm… dusted cocoa powder over the top… : )
Posted by Unknown