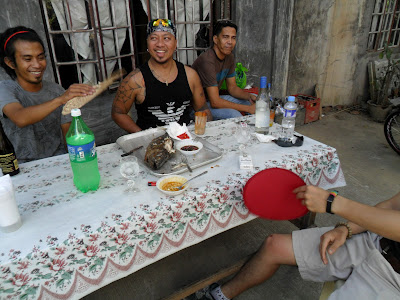 Whilst in Vigan, we met an interesting chap called Bobby. A Philippino living in northwest London, Bobby returns to his hometown of Bantay, just outside of Vigan, at least once a year to visit friends and family. Bobby was a character, from the moment we met him with his “Death is Certain” t-shirt, his Monster yellow sport bike and his wildly fierce tattoos. We were actually taken aback by his unassuming hospitality. Bobby, like a true Philippino, took us under his wing and gave us a gastronomic tour of the town. After seeing our eagerness to find and try the true Vigan cuisine, we were invited to his house for “light lunch” the following day to try his family’s lutong bahay (home cooked meals) before catching a bus for Laoag.

If you were to ask any Philippino whilst travelling in the country where you’d be able to fine “good” food, their response would be: “my house!” Even with the abundance of restaurants/stalls/grills, most Philippinos patron their wife’s/mothers/grandmothers cooking. Being a guest at a Philippino’s house is like being treated like the Queen. Your cup will never be empty, you plate will never have a bear space on it, and food will be brought out in what seems like endless courses. Philippinos believe in abundance when it comes to food: there should always be more then what can actually be consumed. So if you finish a bowl of noodles is a sign that you enjoyed it so much that you want some more, so expect to have more noodles put in your bowl! 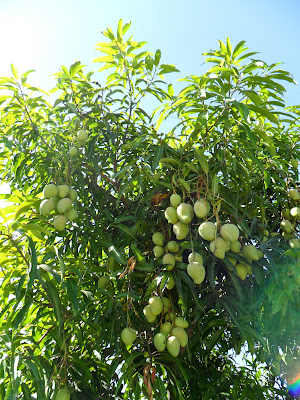 We were shown around Bobby’s casa: his family’s fields of corn, rice and banana trees, which his parents still farm and sell at the market, even at the age of 78! Their organic garden which had a tilapia pond, mango tress, jackfruit tress, papaya tress, an avocado tree and even coconut trees, showed how fertile the Philippino soil really is. As we chomped on a sour green mango, bobby showed us pictures of his pride and joy: his two sons…. Oh and he showed us his other other pride and joys: his two automatic machine guns he keeps by his bed, “…Because people know I’m a foreigner, so I have to be careful” he said jokingly, but with deadly serious eyes. 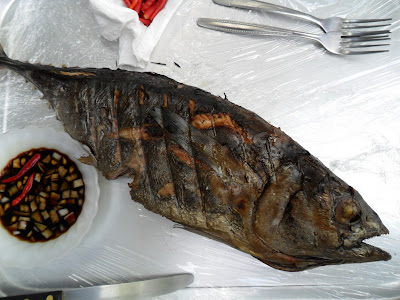 We sat outside to enjoy our meal, along with his friends and family. What was supposed to be one drink quickly turned into… well quite a few drinks. A steady stream of food was brought out: first a whole grilled yellow fin tuna; then chicken noodle soup; followed green papaya pickle; then by banana fritters; fresh coconut; and some more alcohol. We missed our 4’oclock bus, and the next bus after that… and the next bus after that again. Eventually, as the deliriousness from the food and drink set in, we realised we had to get on the next bus, otherwise we would never make it Laoag, and would properly have to face more food! So we said good bye, to Bobby and his lovely family, and got on the last bus of the day, feeling content that we truly experience Vigan lutong bahay.
Posted by Unknown