It’s hard to be disappointed with food in Sagada. You can be sure that the food being served in the local restaurants has been grown/reared locally. This is evident by the sculpted mountains that flow through the Mountain Province, terraces that have been systematically carved from the sides of the mountains. The organic farms ensure the sustainable use of water, and make crop rotation easier for the year. 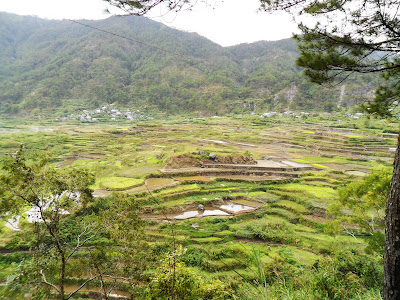 Our days started with a killer breakfast at Bana’s Café. The full works, as the likelihood of having a proper lunch was slim, especially when caving and hiking. So we splurged a little, and after all, Bana's was the best place in town to get some proper coffee:

Bananas with fresh, homemade thick and deliciously creamy yogurt. It’s hard to find decent yogurt in the Philippines as cows are rarely milked, and the “fresh milk” that is available tends to be imported from New Zealand. The milk used to make Bana’s yogurt comes from the Carabu – the waterbuffalo. In the Philippines, the buffalo is considered the farmer’s best friend, as it ploughs the land, produces vitamin rich dairy produce and is a symbol of strength and agriculture. The meat is leaner then, and contains as much iron, as beef. I was recently told, that Buffalo dairy products are now being seen as a lucrative business. The milk of the buffalo has more nutrients then that of the cow, and buying milk from the buffalo which has been reared domestically, is cheaper then importing long life cow’s milk from Australasia. 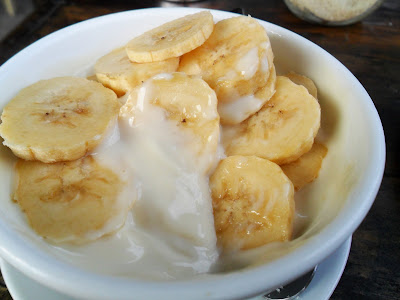 Next on the morning menu was either:

Bana’s Longsilog, which was delectable. The sausage had been partly opened so the fatty porky bits on the inside crisped up. They had, possibly the best fried egg I had had since leaving Manila. The yolk was runny and the whites slightly crispy… 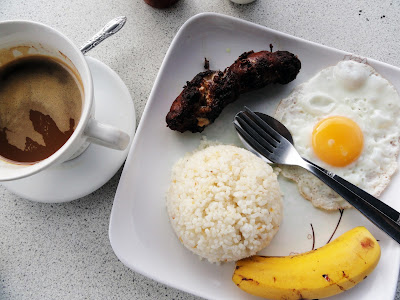 …Or it would be one of Bana’s selection of omelettes served with whole grain toast and local marmalade. Lighter then the Longsilog and a little healthy if vegetables were chosen for the filling. The egg was nice an fluffy and the vegetables still retained some integrity, and weren’t soggy. It was a perfect breakfast before a hike, as it wasn't too greasy and filling to impair mobility… unlike the next break fast…. 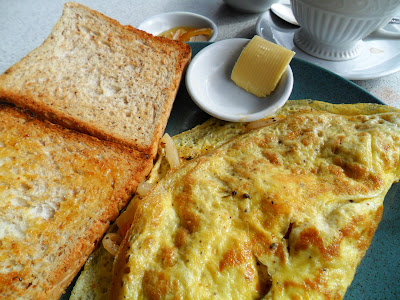 …So the Bana’s Favourite, was probably our favourite breakfast opotion. It consists of whole grain toast, local bacon, two eggs, marmalade and fresh fruit. This was saved for the day of departure, before we hade to make a six hour journey to Baguio. The intension was to eat enough that we would want to fall back asleep on the bus, but this was impossible with the winding roads, and the rickety seats. 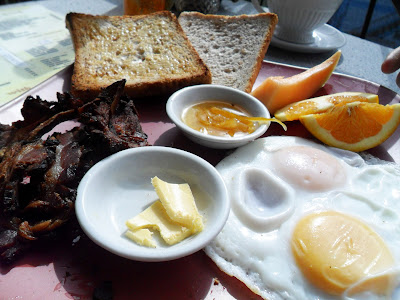 After a day's trip, and depending on what time you get back into Sagada Town, a drink or a snack is surely in order to gain back all the lost energy. This can either be in the form of a super strong Red Horse, or equally pleasant: A lemon meringue pie from the Lemon Pie Inn. We stumbled here after a long hike. The Inn was bright yellow, and I remember reading about it in one of my favourite Philippino food/travel blogs (http://lakad-pilipinas.blogspot.com) as a place that was recommended. 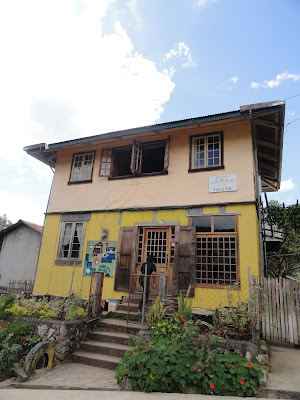 We sat ordered their famous Lemon Pie, and whilst we waited we took in the interior. A mix of traditional Sagadan design with an arty twist. Colourful art broke up the traditional wooden interior, with no eclectic ornament seeming out of place. The seating was low, with cushions and low tables, which I can imagine can get a little uncomfortable after a while. I was disappointed not to see any alcohol on the menu, as we were hoping to come back for evening drinks, but we figure, with the early closing time of 8.30pm, the establishment was more of a café then a bar. 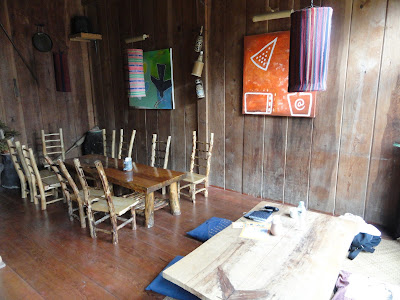 We got speaking to the writer of another travel blog Biyaheng Pinoy (http://www.biyahengpinoy.blogspot.com) whilst at the Lemon Pie Inn. He told us he decided to stay on in Sagada and help promote the Lemon Pie as he loved the idea so much. He has been really very successful in all efforts of making the Lemon Pie Inn customer friendly, from decorating the interior, to promoting the Inn on social networking sites, and generally creating a buzz for the tangtastic homemade pies. They are now so famous, one of the main culinary attractions of Sagada. 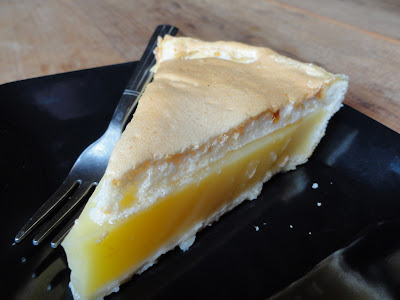 The story of the Lemon pie goes back a few generations. A recipe was passed down the family and 12 years improvements were made to create what is now the most famous Lemon Pie in the Philippines. The pies were originally take up town to the market where they were sold, but now, as the town develops further downtown, the owner decided to stay put and let people come to him for his delicious treat. The pie has now been enjoyed by many locals and travellers alike, and continues to be bogged about by avid foodie (like myself).
Posted by Unknown