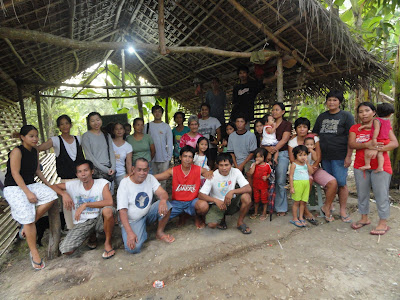 Our visit to the Namaba coconut producers in Sibonga was an insight into a prominent problem faced by many farmers in the Philippines. The land disputes, mainly between landowner and a group of farmers can last many years, and is something that can bubble up over time. As the rich nearly always get their way in a corrupt country, the farmers stand little chance in saving their lively-hoods. They are often forced to move else where and find other jobs, whilst the land they had once grafted so hard on is demolished to make way for new concrete houses, or sold to large plantation companies. The question here is: “is it not the land owner’s job to protect the people who inhabit his/her land?”

The story of the Namaba producers was actually more hopeful then sad.  From the community, 37 strong-minded farmers came together and tried to get as much help and support as possible in their feud. As it happens, the coconut farmers are 100% entitled to the land they inhibit. The owner is an American-Philippino who spends most of his time in America. He also doesn't legally own the land as it was originally sold to and is under the name of his mother in-law. The farmers claim the so-called “land-owner” is abusing his powers and wants to evict the farmers from the land because he can…. Why?  Well, like most things it was a series of events that escalated out of control. I was told a few stories that seemed rather petty, but they all seemed to agree the problems worsened after the Namaba community got together to sign a petition to close a battery chicken farm owned by the Land Owner, which sat amongst the farms and houses of the Namaba people. They claimed the chicken farm was making their children ill, and that it emitted a bad smell.  The farmers were successful, and the farm was shut down. As you can imagine, the landowner wasn’t best pleased with the outcome.

So from then the problems got worse. The landowner claimed the coconut farmers were selling “stolen” coconuts as it had come from his land. As things work in the Philippines, the owner is entitled to a percentage share of the over all produce from his/her land. The farmers even claimed the landowner was caught a couple of times trying to harvest the crops for his own benefits. Because of this, the famers won their case. As things worsened, the landowner called the police who brought arms and batons. Unjustly accused, the government got involved, and so did SPFTC, they got the Namaba people a lawyer to fight their case. With the support behind them, the coco farmers were successful and won the case….

…But during our visit, there was talk that the landowner was to come back from America with a stronger case against the farmers. This was worrying for the farmers, as even with the government support, corrupt ties within the rich can mean the law stands for little or nothing in many cases. SPFTC is also now finding it hard to fund the many land dispute cases that are now ongoing through out Southern Philippines. They are asking the government to supply a lawyer, as it is the job of the government to protect it’s people, but again this is a problematic and long process.

I have faith that the Namaba farmers will be able to beat such the corrupt system, and a bully of a landowner. The sense of community I felt during my visit was wonderful. They were so determined to fight what was wrong, and continued doing what was right, like still supplying the percentage of produced owned to the landowner. Because of this, they have so much support from the government, SPFTC, and the media. The coming together of a community during hard times is so curtail as I had seen. The farmers were smiling and talked of the optimism they held for the future of their children. I suppose it is in the Philippino culture “bahala na,” and expression used by the Philippinos, “all things will pass, and life is to be lived on.” 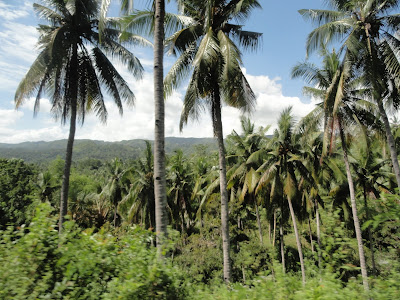 So as life was to be lived on, we sat in their meeting area, a community built outdoor bamboo structure, we ate some home made coconut ice-cream, and took in the beautiful views. This was defiantly something worth fighting for.
Posted by Unknown