We were told that the province of Ilocos, northwest of the Philippines, serves up some of the best and most bizarre foods to be found in the country. Of course this is debateable if you're a Philippino, but as a foreigner wanting to try all the lovely delicacies of the country, I went where the majority suggested. Our trip started in La Union, where we learnt to surf at the La Union Surf Resort. Highly recommended for the personal instructor… but very disappointing when it came to dinner time. With little else choice, we wondered down the beach and found a cute little café called Lolla Nanny’s. Hidden away, behind the loud obnoxious “surf resorts” with overly bronzed, and bleached blonde surfer types, lies a cute little B&B, with basic accommodation, but lip smackingly tasty food. The menu is a bit eclectic serving anything from curry to sushi to steak and even Vietnamese spring rolls. We ordered a little more then we should have, but after a day off falling of boards, being smacked in the face by unexpected waves and generally being raped by the sea, one feels a little hungry. We ordered the curry, tuna steak and a Vietnamese spring roll with vegetables. Tasty. Probably the most inexpensive and best value for money food establishment there is on La Union’s ever developing beach front.
Longanisa for breakfast, lunch and dinner

The next day we headed on up to Vigan where time has stood still for nearly two hundred years. The buildings are a unique mix of Chinese, Spanish, and Philippino architecture. It’s a beautiful town with lovely roads steeped in history and wonder. We stayed in an old mansion house, the famous Villa Angela. A beautiful building, although, like a lot of the Philippines, it needed a bit of maintenance and a lick of TLC.

This is where we began our hunt for some Vigan Longanisa. Let me quickly explain: Longanisa is like a Philippino chorizo/sausage. They tend to be smaller then the English banger, but they have a strong distinctive flavour depending on where they come from.  Longanisa from Pampanga (near Manila) tends to be sweeter and more of a cylindrical shape, where as longanisa from Vigan tends to be fatter but more garlicky and spicy.  They tend to be served as Longsilog, a popular breakfast dish consisting of Longanisa, garlic rice, a fried egg and some pickled vegetables. As a fan of longanisa, I wanted to try ALL the types available in the town. Every family/restaurant has their own version, and I was intrigued to find out what made a good longanisa.

So the plan was to eat it for breakfast, lunch and dinner. We started of with good intentions, but after a while, as you can imagine, we got a little bored. But here are a few establishments with longanisa we recommend: 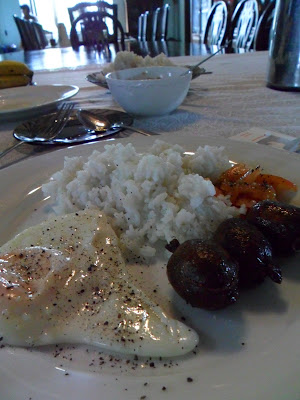 Rated #3, Villa Angela, Vigan, for breakfast. Tasty longanisa, garlicy, but rather fatty and chewy. The rice was plain, and the egg over done. The tomatoes on the side were a good accompliment though. 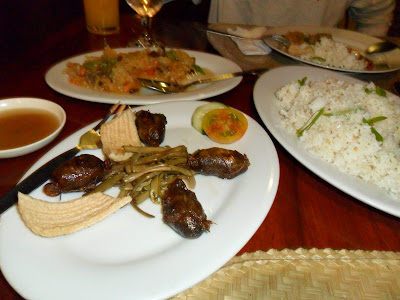 Rated #2, Uno Grille, Vigan, for dinner. These longanisa were herby and garlicy. Really tasty. The side pickles were even better. Appologies for the picture, we were too egger to tuck in! 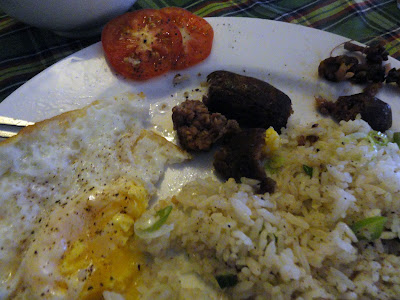 Rated #1, Café Leona, Vigan, for Lunch. Garlicy longanisa with a hint to pepper, The rice was really tasty, although the my egg was slightly over done for my liking, but it did have nice crispy whites. So good we forgot to take a picture before we tucked in!

So as the pictures show, the more tasty the longanisa, the worse the picture due uncontrollable gluttony. That’s proof!

One Night in Vigan 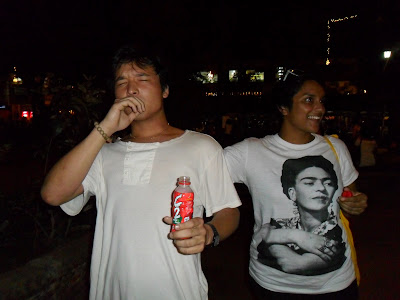 So on our last night in Vigan we met up with Bobby (more about Bobby later) for a few drinks. We had some Philippino barbeque which includes: chicken intestine, giblets, quail eggs, and fish balls. Tasty, all deep fried and covered in either a chillie or a hot and sour sauce. This was only the beginning of our night, little did we know what we were in for…

So after a few drinks, we headed over to find the Balut man. Balut for those who don't know is a half developed chicken or duck (in this case duck) which has been steamed for 8 hrs and eaten whilst still warm with a pinch of salt. There are steps to eating balut though...

1.    Crack the top and peel back the shell. Sip the juices.

2.     Peel the egg further down and suck out the chick. This has to be done quick or you get the claw stuck in your tooth.

The key is not to look at the chick, and it’s better to do it at night and after a few drinks for dutch courage. I must say here…. That I did not complete the egg. I actually looked down as I peeled the shell, and what I saw was no thing of beauty. I found the soft chick on my lips and it’s slightly feathery skin to be too much for me to handle. The soup was fine though, tasted like strong chicken soup and the yolk was okay, but a bit chalky for me.

Philippinos love Balut. After 4pm the streets echo with balut sellers calling out to the public wanting what is now more of a street food rather then a delicacy. I have seen barbequed balut embryos, sizzling balut, and even balut with chips, but I know the most popular way to have it is hot, still in the shell and straight from the vendor. I have a theory as to why the balut is so popular among pinoys, and this is open for debate… but in a nation so obsessed with youth and beauty, balut is allegedly supposed to keep you young and youthful, whilst also being an aphrodisiac. Scientifically, it could be true as the egg is high in nutrients, and with a half developed chick inside, the nutrients are more and greater. It kind of reminds me of the Chinese film, Dumpling, where a women "suffering" from mid life crises goes to the extreme by eating human embryos to keep herself youthful…. Anyways. It’s only my theory of why the snack is so popular in a nation where everyone looks ten years younger then they are.

Along with other bizarre fare in Ilocos is one day old chick. This is exactly what it sounds like. It’s one day old chick, plucked, but still with it’s innards, on a stick and fried till golden brown. We were not brave enough to try this… I think it was they way it was described to us: soft, crunchy and chewy. It’s defiantly a mind over matter thing, but the matter came three on a stick, was comical and sad at the same time, and very very beaky! Next time.

Okay, so now on to the not so gross stuff. After the balut we headed to some stalls where there vendors selling Vigan Empanada. The family run stalls seemed to have a good, and very effective system running, with each family member at each station. Empanadas are made by rolling out a flour dough, very thinly on banana leaf. This works well as a cheap non stick surface. The filling of cabbage, sausage meat and a raw egg goes on and is quickly closed and sealed for deep frying which only takes seconds. The result is a crispy empanada with a tasty filling of peppery meat, crunchy cabbage, and a runny yolk.


We had this with Okie, a fried batter of onions, cabbage and little shrimp. Okie means crustations/crusty/crunchy… one of them, the meaning got lost in translation. This was all accompanied with vinegar and shallots. Tasty, leaving us with a film of yolky crease around our lips and fingers.


It was defiantly a good night, both an assault and a pleasure on the taste buds. I do recommend people to go to the stalls by the Plaza in Vigan, as when we were there there didn't seem to be many Tourists, just locals. I think this is when the Lonely Planet can be a God send, but also a Curse. The restaurants mentioned in the book were all packed out with tourists. They restaurants were/are good, but a little over priced. The atmosphere's generic, and the service is to good to be true. The stalls had a buzz; there were families squashed on the benches; the food was chomped, forget about manors; there were genuine toothless smiles on the vendors faces; and a sense of excitement when we saw our empanada being fried in front of our eyes.