In a small sleepy village outside of Cebu lies the heart of SPFTC’s Fair Trade production of their products, which include dried mangoes, mango balls, dried manangy, dried spices, tamerind, and virgin coconut oil. Theirs is an environmentally sound development consisting of a production area, an office, workshops, delivery vehicles all alongside allotments, plants and trees. We were shown around their site, which was built 16 years ago on leased land. The site gradually grew over the years, designed to be as environmentally friendly as possible. This was evident form the moment we drove through the entrance of the plant; pass gates and fences made from recycled plastic bottles. A great idea and a cleaver solution to the huge problem of plastic recycling and garbage disposal. 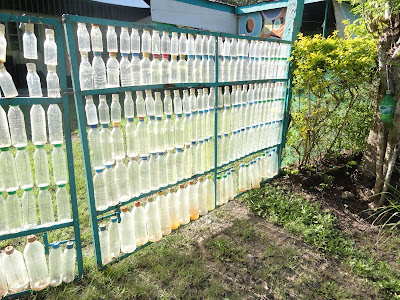 Rolo, the manager and overseer of the production side of SPFTC’s products showed us around. He’s sense of humour and approachable manor, made the tour really interesting. Rolo knew every statistic, all the ins and outs and had insightful answers for our every question. We are very grateful for his patience with us and for letting us pick his brain on the production processes.

The main body of the site is their production area that is made from three cargo containers. We were told that along with using a cheap recyclable structure, it was also chosen as an easy means of moving if they had to due to not owning the land their site is on. 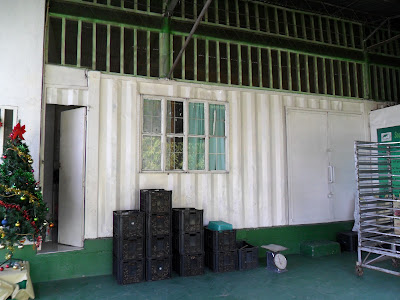 The SPFTC office was also made from a cargo container, which had a bit of work done to it. With wooden floors, an out door seating area and two large office spaces for admin. 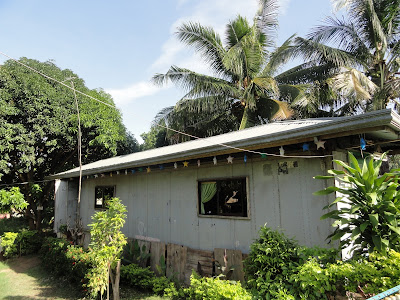 The grounds consisted of two mango trees, banana trees, managy trees and tamarind. Only the tamarind was grown for the processing process. The other produce came in from Fair Trade suppliers from around Cebu for production. The plants on sight were mainly for experimental processes only. 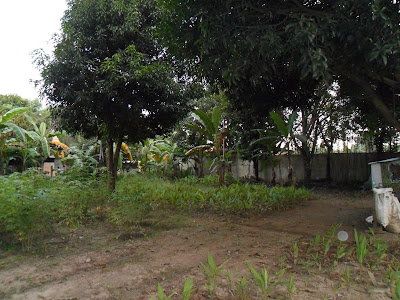 When we were there, SPFTC were experimenting with making mango balls from dried mangoes as an alternative healthy snack. And instead of buying in machines, Rolo and his team of engineers were coming up with their own inventions in production machines.

We were shown through the steps of process when making dried mangos, which is the same for other dried fruits, but with different timings in the process for depending on the water content of the fruit. We had to wear funny protective gear so not to contaminate the sanitised production areas. As no mangoes were being processed at the time, we weren’t actually able to see much production, but the picture give a good idea of the steps.

1. Fist we were shown the area in which the mangoes are cleaned, peeled and sliced. Each mango had two large slices and four small slices. They had designed special peelers specifically for the mangoes so the inside fruit isn’t damaged and little flesh is removed with the skin.

When we were there, a batch of malangy had come in for a similar process, they were placed in the cleaning up room to be ready to be processed. 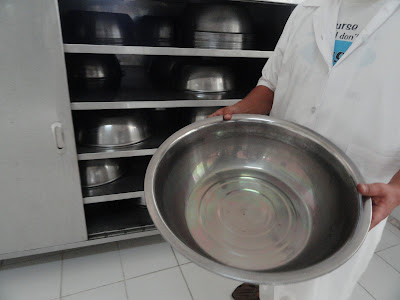 3. After being removed from the syrup, the mangoes have lost 15% of their water. They are then blanched in hot water to remove excess syrup.

4.  They are then placed on racks that go into the dehydration ovens. This gives the mangoes a steady warm heat and an air flow allowing the mangoes to dry fully and lose all their water so they are just fruit. SPFTC has two dehydrating ovens that are heated using a water system that heats up from burning natural waste from coconuts, mango skins, and other waste from the plant. This process takes a day also.

5.. After the dried mango comes out of the dehydrator it has lost all water and is pure fruit. They are left to sit in dark room, then packaged and labelled on site.

6. From 1000kg of mangoes the outcome is 150kg of dried mangoes. The mango stone is used in making mango puree. The stone is put through a specially design machine which removes as much pulp as possible. The pulp is then used to make mango juice. The syrup used in the osmosis process is also used in their juices.

7. Each batch goes through quality control. A sample from each batch is kept if any future problems were to occur.

After our tour, we were taken to the meeting room for refreshments and snacks. Her we discovered the full extent of the scale of work SPFTC did. To meet demands from the West and Japan, they had to make changes in their machines, in their production methods, in their packaging and labelling. This was interesting to hear. The changes took a long time, but there were creative solutions around this. For example, the dehydrators were run on a reverse fridge system. This was extremely bad for energy consumption, but with help and guidance, they came up with a water system that was heated using waste from the site.

Cleaver solutions like this and the inventions of machines for the production process not only makes me feel like SPFTC are advanced compare to larger producers in the Cebu area, but that they are very good at adapting to a greener, more sustainable way of manufacturing.

We had a great time, at the production plant. I almost have a problem calling it a “production plant”, because it didn't feel like that at all. It felt more like a place where good ideas sprang and greener possibilities were seen. It felt homely, lush with vegetation, clean, welcoming, and most of all a good example for production of similar products around the world.